By Michael Steele
Special to CNN 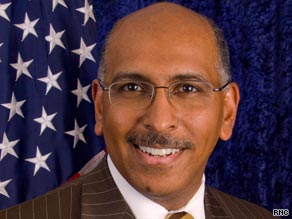 (CNN) -- Friday marks President Obama's 200th day in office, and in most respects, his second hundred days as president have been worse than the first 100.

Obama campaigned on bringing "change" to America, and during his first 200 days as president, his real definition of change is becoming absolutely clear to Americans.

Obama and congressional Democrats are determined to conduct their reckless and costly liberal experiments on the American people without any regard to the consequences.

Whether a $787 billion stimulus bill, a "cap-and-trade" scheme that is nothing more than a huge national energy tax on every American family and business, or a $1.6 trillion government-run health care plan, more and more Americans are rightfully concerned about Obama's change for this country.

Since Obama and Democrats rushed through Congress a $787 billion stimulus package, unemployment in America has risen close to 9.5 percent, and every indication is that it will climb even higher when July's unemployment report is released Friday.

In total, more than 2.6 million jobs have been lost since Obama took office. But what has the president's stimulus bill brought us, if not the jobs he promised?

Have the last 100 days of the Obama administration been days of change or days of frustration? Get the results of your vote.
Tonight, 8 ET

Wasteful spending, such as $18 million to redesign Recovery.gov, the very government Web site used to monitor stimulus spending, or $3.4 million for an "eco tunnel" in Florida designed to provide safe passage for turtles looking to cross the street. This is not the economic stimulus that the American people expected.

The second of Obama's grand experiments on America was his massive so-called cap-and-trade bill that was rammed through the House of Representatives this past June so fast that congressmen weren't given the chance to read it. This bill is nothing more than a national energy tax, plain and simple. Its sole purpose is to increase the cost of energy so that Americans might use less.

The Heritage Foundation estimated that it would end up costing the average American family up to $1,870 per year and decrease the national GDP by $161 billion in the year 2020. The foundation also determined that during the 2012-2035 timeline, job losses would average more than 1.1 million. Add in the fact that it would do almost nothing to prevent "climate change," and all that is left is a national energy tax on environmentally friendly clothing.

Obama's third and final experiment of his first 200 days as president -- and arguably his most dangerous -- is the fundamental transformation of our health care system.

Obama is correct about one thing: Our health care system needs reform. Health care today costs too much for families and small businesses, preventing too many Americans from accessing the affordable quality care they need, when they need it. However, the president's prescription to rein in these costs has little to do with real-world dollars and cents and everything to do with the complete government takeover and control of one-sixth of the U.S. economy.

The president claims that more government involvement in health care will promote competition. However, creating such a government-run entity would result in a massive government health care monopoly.

Private insurers would soon be put out of business, unable to compete with the subsidized government-run plan the president and liberals want. More than 88 million Americans could be forced out of their current private insurance plans and into the government-run plan, according to a study by the Lewin Group.

Obama claims that if you like your current health care, you can keep it, but this is simply not true.

Then there is the issue of cost. Despite what the president says, his government-run plan won't make health care more affordable. Quite the opposite. Nothing ever becomes cheaper by being more expensive, and the Democrats' plan would cost at least $1.6 trillion, according to an analysis by Roll Call.

The Congressional Budget Office determined one of the House Democrats' plans would add more than $200 billion to the deficit over the next 10 years. The president is also planning to cut hundreds of billions of dollars from Medicare and Medicaid to help pay for his government-run health care scheme. This is the epitome of robbing Peter to pay Paul.

The president and his Democratic allies have looked to raise taxes on many small businesses to help pay for his government-run health care scheme, a foolish proposition even during the best of times, let alone during a recession.

Many small businesses would be hit with a penalty equal to 8 percent of their payroll for failing to provide insurance for their employees. Punishing small-business owners with punitive tax legislation such as this will only increase the unemployment rate and extend the recession.

Obama's first 200 days in office should be seen for exactly what they are: a clear indication of where he intends to direct America during his presidency. It is a direction that places less emphasis on individual entrepreneurs and private creativity and instead places power in the hands of a massive federal bureaucracy.

The president has done all this in just 200 days, and there are still more than 1,200 days left in his administration. That's a frightening thought.

The opinions expressed in this commentary are solely those of Michael Steele.