WASHINGTON (CNN) -- The Senate voted Thursday night to extend the "Cash for Clunkers" program with an infusion of $2 billion. 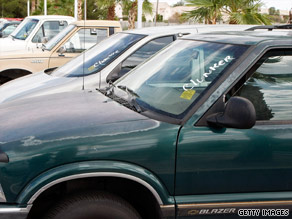 President Obama is expected to sign the OK to spend $2 billion more on the "Cash for Clunkers" program.

White House aides said earlier that President Obama will quickly sign the bill into law to prevent any interruption to the popular incentive.

The Senate voted 60-37 to approve the measure already passed by the House.

"[President Obama's] going to want to make sure the funds are in place by this weekend," one senior White House official noted, because of the particularly brisk weekend business the program has sparked.

The program under Obama's economic stimulus package pays people up to $4,500 for trading an older-model vehicle with low fuel efficiency for new vehicles that get better miles per gallon.

" 'Cash for Clunkers' has been a proven success. The initial transactions are generating a more than 50 percent increase in fuel economy; they are generating $700 to $1,000 in annual savings for consumers in reduced gas costs alone; and they are getting the oldest, dirtiest and most air polluting trucks and SUVs off the road for good," Obama said in a statement Thursday night.

"I want to thank Leader Reid and the members of the Senate who moved quickly to extend a program that benefits our recovery and our auto industry while reducing our economy's dependence on oil," he said.

The program was intended to run until autumn, but higher than expected participation caused the government to warn last week the program would run out of money without an infusion from Congress. The extension would keep the program going through Labor Day.

The House voted to add $2 billion to the program before it adjourned for the summer on Friday. With the Senate vote, the additional money will become available right away.

Several top Republicans, including Sen. John McCain of Arizona, raised concerns about pouring more money into the program at a time when the government is deep in debt.

Senate Majority Leader Harry Reid of Nevada and other top Democrats had been lining up votes for the expansion by making the case that the program is providing a boost to the economy by increasing weak auto sales, while also helping the environment by getting "clunkers" off the road in favor of more fuel-efficient vehicles.

The program calls for the engines of the clunkers to be made inoperable so the cars cannot be returned to the road.

Watch what happens to 'clunkers' »

Democratic officials said several hurdles were cleared in order to allow the Senate to pass the bill with new money on Thursday night.

On Monday, two key senators who opposed more money for the program announced they had changed their minds and now supported the extension.

All About U.S. Senate • Economic Issues