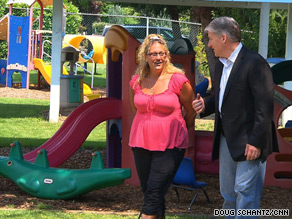 "There were five of us, including the owners. I did the books ... and I could see it was getting tight, money was. They just weren't making the money."

It was just before Christmas.

"They let me go, and they knew I was going to sink," the 42-year-old single mother recalled. "Two weeks later, I lost my apartment. No money coming in, no money to pay rent."

For a couple of weeks, she lived in her van -- until it broke down. Now, she crashes on friends' couches, and her three children sleep at her ex-husband's apartment.

"I'm grateful because he was there to pick up the ball when I just couldn't do it anymore," Bonneau said.

Wherever she goes, Bonneau keeps a packed but organized file: her road map for surviving recession.

"This is a sheet that tells me where free lunches are in the community so that my kids can eat for free," she said, holding the stack of papers and brochures. "I try to stay up on that."

She keeps it handy, and not just to help with her needs.

"I try to carry it so that if I hear of somebody that is struggling, it is like, 'Wait, I know where you can find help.' I know I am not the only person that needs the help."

So does Sharri da Silva.

She is the executive director of programs for the Relief Nursery in Eugene, a family-support organization that is being replicated across the state. In the first three months of 2009, it helped as many families as it did in all of 2008.

"And we served over 1,000 children last year," da Silva said at the Eugene facility. "So that's telling you how drastic the increase is. There are newly needy families, and what I mean by that are families who have had jobs, who have had one- or two-parent incomes, who have had a home, might have even been small donors to the Relief Nursery or volunteered their time here.

"And now they are calling us, saying, 'I just lost my job, or my wife and I both lost our jobs, we're losing our home, and we don't even know what the best [support] system is -- so forget how to navigate it.' What we're finding in Oregon is that early childhood and family hunger is drastically increased."

Increased demand but diminished resources -- a cruel irony of the recession is that government and private funding sources are drying up. In the case of Relief Nursery, that means a waiting list of more than 200 families.

"Every single funding source that typically supports us is having a challenge right now," da Silva said. "When we have people calling saying, 'My family doesn't have food' or 'I'm losing my house, and I don't know where to turn,' that is difficult if we can't help them."

Not that there are not some encouraging signs. The Relief Nursery, whose primary mission is helping children and families with a history of abuse and neglect, was trying to combat the hunger problem, only to have its mobile food bank recently destroyed by vandals. When word of the crime spread, there was a dramatic spike in good donations, and a library area inside its building has been converted for food storage.

"We've also started doing what we call a family fun and food night, which is once a month families come and gather and have a fun meal together," da Silva said. "When we started this in January, the first time we held it, we had 30 families attend. And it's been growing as word had gotten out to our families. And last week we had over 170 families come."

Julie Bonneau's family is among them, often after she has spent another frustrating day hunting for work.

"It's really tough," she said of the job market in a state where the unemployment rate has doubled in the past year to more than 12 percent. "I am finding that I am competing with -- that when you apply for a job, now you have 200 other people standing in the same line."

No room in the shelters, either.

"They are full. Everything is full."

Which makes her all the more grateful for the Relief Nursery safety net.

Her son Gabriel, who will be 4 in October, comes for three hours a day, which means two meals and playing and activities time that are invaluable to a boy trying to overcome a speech impediment. Twice a week, Gabriel also gets speech therapy at the center.

"It is awesome," Bonneau said during a walk in the play area outside. "I know they are safe. I know they are well taken care of. They support Gabriel. He's got a physical disability, but they meet his needs continuously. I don't have to worry about him being hurt. We have had some major challenges in our life, and I just call Relief Nursery."

Although the job search has been frustrating, Bonneau volunteers a few hours a week at her former employer, hoping that if business picks up some, she will be offered her old job back.

And keeping busy, she says, helps her keep her spirits up.

"I have a big support group that encourages me and keeps me positive. I can't lose hope, because my kids will lose hope. I can't let that happen."

All About Eugene (Oregon) • National Economy