Commentary: Cash for clunkers is a clunker

Editor's note: Jeffrey A. Miron is senior lecturer in economics at Harvard University and a senior fellow at the Cato Institute, a think tank that promotes libertarian views. 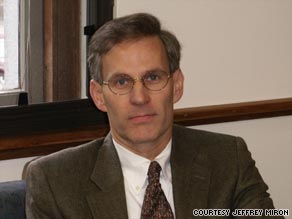 Jeffrey Miron says "cash for clunkers" is a mistake on environmental and economic grounds.

CAMBRIDGE, Massachusetts (CNN) -- Toward the end of last week, news spread rapidly that the "cash for clunkers" program was about to run out of money.

Under this policy, consumers who own a car with low fuel efficiency can receive $3,500 to $4,500 from the federal government if they buy a new car with higher fuel efficiency.

The goals of the program are to help the environment and to stimulate the auto industry.

The program has been popular with consumers and car dealers. Congress initially allocated $1 billion to the program, and this funding was expected to last through November 2009. Yet the program apparently committed the entire $1 billion after only four days in operation, and many interested consumers have not yet been able to consummate a deal.

Because the program is such a hit, President Obama and members of Congress have vowed to add funding. The House voted an additional $2 billion last week; the Senate may vote Tuesday.

Despite the program's popularity, cash for clunkers is bad medicine for the U.S. economy.

The first problem is that under the terms of the program, any used car that is traded in must be scrapped, and key parts like the engine and drive train destroyed. Thus the program pays people to junk cars that still have economic value. A good friend, for example, is planning to trade in a car that is in good working order. Before the program, he had planned to use the car for another couple of years.

How can it make any sense for policy to encourage the destruction of working cars? Proponents of the program offer two rationales: that the higher fuel efficiency of new cars will reduce the use of fossil fuel, and that the increased demand for new cars will rescue the failing auto industry. Neither of these defenses passes muster.

Cash for clunkers will have a minor impact, at best, on the use of fossil fuel. Many people who trade in clunkers would have upgraded to more fuel-efficient vehicles within a year or two anyway. Thus the program might hasten the adoption of more fuel-efficient cars and trucks, but this is a modest, one-off effect.

Worse, cash for clunkers might cause more driving, since new cars are more fun to drive, and more fuel-efficient cars are less costly to operate. Plus, it takes energy to scrap old vehicles and produce new ones, so the net effect of the program might even increase the use of fossil fuel.

Attempts to reduce the use of fossil fuel should focus on two different policies: higher gasoline taxes and increased rush-hour tolls on highways. If gasoline costs more, everyone faces an incentive to drive less.

If highways cost more at rush hour, some people would commute earlier or later, which means less congestion and reduced gasoline use by all commuters. These two approaches are easy to implement given existing policies, in contrast to cash for clunkers, which requires complicated new rules and enforcement procedures.

The environmental defense of the program is therefore not persuasive. The question is then whether cash for clunkers makes sense because it helps resuscitate the auto industry.

The answer is a resounding no. Government policy should not favor some industries at the expense of others, but that is exactly what cash for clunkers does. The program helps consumers who can take advantage, and it increases profit and employment in the auto industry. But funding for the program comes from all other taxpayers, so it harms the consumers and industries not supported by the program.

Thus cash for clunkers creates winners and losers based on political considerations, not economic values. Whether or not government spending is a good way to stimulate the economy, the specific kind embodied in this program is misguided because it distorts the economy's allocation of resources across consumers and industries.

Any spending stimulus, of course, tends to favor some sectors over others, which is one reason stimulus is better accomplished via reductions in tax rates, not increased spending. Tax cuts improve the incentives to work, save and invest, thereby making the economy more productive going forward. Reductions in tax rates are neutral across sectors and therefore let private valuations of costs and benefits -- not political connections -- determine winners and losers.

Cash for clunkers is therefore just redistribution to certain consumers and to the auto industry; it is more bailout dressed up as environmental policy. Congress should end the program, not expand it.

The opinions expressed in this commentary are solely those of Jeffrey A. Miron.

All About Cars and Car Design • Gas Prices • National Economy