WASHINGTON (CNN) -- And now, the rejects. 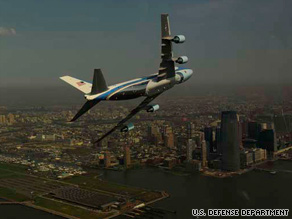 Three months after the White House released a single photograph taken during a photo op of "Air Force One" flying over New York -- a flight that caused panic on the streets below -- the U.S. Air Force on Friday released the remaining 145 photos taken during the flight.

The photographs show the Boeing VC-25 -- a military version of a 747 -- making three passes by the Statue of Liberty, at one point accompanied by an F-16 fighter jet and at another point making a steep bank not usually seen with passenger aircraft. That latter move may have contributed to the chaos below.

The photographs and several lengthy government e-mail chains were released in response to Freedom of Information Act requests by CNN and other news organizations.

The e-mail chains show that the flight's government organizers were aware of many New Yorkers' fears of low-flying aircraft before the April 27 flight, and show a flurry of second-guessing, finger-pointing, damage control and occasional expressions of regret in the hours immediately after the flight.

Watch a compilation of still images of the flyover »

"Thanks for the heads up on sensitivities in the New York area," an Air Force colonel wrote in an e-mail two days before the flight. "This is an issue that PAG [the Presidential Airlift Group] has also been concerned with. As a result, their coordination has been substantial."

But while the White House, the military and numerous federal and local government agencies coordinated the flight, the federal government demanded secrecy, preparing a news release that was to be distributed only if there were media inquiries.

Those inquiries came during the morning flight, triggering a quick chain of e-mails among government officials.

"We...need to construct some sort of timeline on when folks became aware of it if that is possible," one Air Force official wrote, responding to the public interest.

"I agree we... need to accomplish damage control, but we aren't the POC [point of contact]," the response reads. "Nor do I want to become a belly button for NORAD to push on this one."

Wrote one top Pentagon spokeswoman: "Nothing like having everyone point the finger at someone else so we ALL look like a big bunch of buffoons... can you say Moe, Larry & Curly!??!?!"

In addition to the informal e-mail banter, the documents show the regimented system the Pentagon uses to monitor and respond to breaking news stories.

"No positive spin is possible. Admit mistake," it concludes.

In another e-mail, USAF Col. Scott M. Turner, commander of the Presidential Airlift Group, was doing just that. "Again, my apologies sir. Real intent here was to honor NYC, not cause mass chaos," it reads.

The next day, the Northern Command's internal memo included depictions of New York's three major tabloids featuring the headlines, "Scare Force One," "Just Plane Stupid!" and "How Dumb Was This!"

The photographs released Friday, meanwhile, show the presidential aircraft making a steep bank, seemingly well beyond the 30-degree maximum for Boeing 747s carrying passengers, according to one airline pilot consulted by CNN. That may have contributed to the anxiety on the ground.

The Pentagon estimated the cost of the flight at $328,835, which includes the Boeing aircraft and the two fighter jets that accompanied it. But, they said, "the hours would have been flown regardless, and the expenses would have been accrued on a different mission."

The VC-25 aircraft is designated "Air Force One" only when the president is aboard. President Obama was not on the plane during the photo op.

After the incident, Louis Caldera, the director of the White House Military Office responsible for the flyover, resigned.

"I have concluded that the controversy surrounding the Presidential Airlift Group's aerial photo shoot over New York City has made it impossible for me to effectively lead the White House Military Office," Caldera said in a letter to Obama. "Moreover, it has become a distraction to the important work you are doing as president. After much reflection, I believe it is incumbent on me to tender my resignation and step down as director of the White House Military Office."

All About September 11 Attacks • Air Force One • New York City