(CNN) -- With their budgets teetering on bankruptcy, states are digging deep to find creative ways to ease their financial woes. 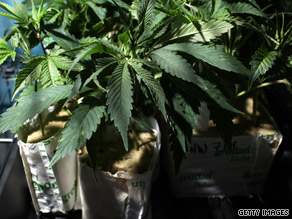 If marijuana were legalized, it could become California's No. 1 cash crop.

Although fiscal year 2009 was grim for states, observers predict that 2010 will be even worse.

"The numbers that states are looking at in terms of their shortfalls is truly staggering. And all of this is happening in an environment where raising taxes is still pretty toxic, and it's pretty explosive," said Sujit CanagaRetna, a senior fiscal analyst for the Council of State Governments.

Instead of raising taxes, states are putting taxes and fees on specific items and services as they try to decrease their budget gaps.

"You see this blizzard of fees popping up all over the country and in very unusual places," CanagaRetna said.

One of the more controversial ideas is to legalize the sale of marijuana, as proposed in a bill introduced in California's state legislature by Democratic State Assemblyman Tom Ammiano this year. The bill proposed taxing pot by $50 per ounce. If legalized, marijuana could become California's No. 1 cash crop, bringing in an estimated $1 billion a year in state taxes.

The bill was shelved this session, but a revised version will probably be reintroduced.

This year, lawmakers in Georgia turned not to pot but to poles as a possible source of additional revenue.

Republican state Sen. Jack Murphy's proposed "pole tax" would have charged patrons of strip clubs a $5 entrance fee. The bill was not approved.

Nineteen states have explored gambling-related proposals as ways balance their 2010 budgets, according to the National Council of State Legislatures.

In Alabama, lawmakers considered bringing more bingo games to the state and legalizing slot machines, but the measure was not approved.

Delaware's Democratic Gov. Jack Markell signed legislation creating a sports lottery that legalizes single-game betting. Four professional sports leagues and the NCAA have filed a lawsuit over plans for the lottery, fearing that it threatens the integrity of the games.

"Basically, what we are dealing with is a larger issue here, which states have been grappling now for a few years, that is the shift in our economy away from manufacturing economy to a service-based economy," CanagaRetna said. He noted that when sales tax doesn't apply, states aren't able to capture the economic activity.

Here are a few of the more interesting ways states are trying to conserve -- and create -- some extra funds:

Can you be more creative than your state? Leave your suggestions below.