Powell: Both Gates, police could have handled things better

WASHINGTON (CNN) -- Former Secretary of State Colin Powell said Tuesday that he has been the victim of racial profiling but believes Harvard professor Henry Louis Gates Jr. could have been more patient with the police officer who arrested him. 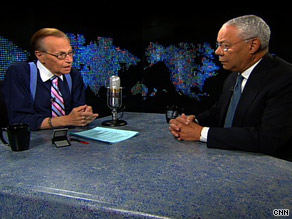 Former Secretary of State Colin Powell told Larry King that he has been subject to racial profiling.

At the same time, Powell also faulted the Cambridge (Massachusetts) Police Department for escalating the situation beyond a reasonable level.

"I think Skip [Gates], perhaps in this instance, might have waited a while, come outside, talked to the officer and that might have been the end of it," Powell said in an interview with CNN's Larry King.

"I think he should have reflected on whether or not this was the time to make that big a deal.

Watch what Powell would advise Gates »

"I think in this case the situation was made much more difficult on the part of the Cambridge Police Department," Powell said. "Once they felt they had to bring Dr. Gates out of the house and to handcuff him, I would've thought at that point, some adult supervision would have stepped in and said 'OK look, it is his house. Let's not take this any further, take the handcuffs off, good night Dr. Gates.' "

Gates, a top African-American scholar, was arrested July 16 for disorderly conduct outside his Cambridge, Massachusetts, home after police responded to a report of a possible burglary. The charge was later dropped.

Powell said that under the circumstances, Gates may not have been in the appropriate frame of mind to best handle the situation.

"He was just home from China, just home from New York. All he wanted to do was get to bed. His door was jammed and so he was in a mood where he said something," Powell said.

He recalled a lesson he was taught as a child: "When you're faced with an officer who is trying to do his job and get to the bottom of something, this is not the time to get in an argument with him.

"There is no African-American in this county who has not been exposed to this kind of situation," Powell said. "Do you get angry? Yes. Do you manifest that anger? Do you protest? Do you try to get things fixed? But it's the better course of action to try and take it easy and don't let your anger make the current situation worse."

The former secretary of state said he has been racially profiled "many times," including an incident that took place while he was the national security adviser to President Reagan.

When asked how he dealt with the situation, Powell said, "You just suck it up -- what are you going to do? It was a teaching point for him. 'Yes, I'm the national security adviser, I'm black, and watch, I can do the job.' "

In the interview, Powell touched on other issues, ranging from North Korea to U.S. figures such as Sarah Palin and Rush Limbaugh.

While North Korea may be "bizarre," he said, their negotiators are second to none.

"They are some of the best, toughest negotiators I've ever dealt with," Powell said. "And you can read the whole history of our negotiations with North Korea, going back to the Korean armistice discussion, and you'll find they know what their negotiating positions are, and they will drive you crazy, and they will use your impatience against you."

Powell said Clinton seems to be "in the mold of almost all secretaries I have known."

Former Alaska Gov. Sarah Palin, he said, is a "fascinating figure ... you have got to hand it to her." Palin transferred power to Gov. Sean Parnell on Sunday.

He repeated his assessment that the former Republican vice presidential candidate had not been ready for the Oval Office last fall, but said she was worth watching.

"Apparently, she is going to re-enter public life ... . We will have to see what her plans are," he said Tuesday. "I don't know if she is doing all of this for political purposes or just to start a new life in the wonderful world of speaking. And we will all be watching with great interest."

Powell, who has previously been critical of radio host Rush Limbaugh, restated his opinion that members of his party ought to do the same.

"The problem I'm having with the [Republican] Party right now is that when he says something that I consider to be completely outrageous and I respond to it, I would like to see other members of the party do likewise, but they don't," he said.

Watch Powell talk about Limbaugh and the GOP »

Asked whether he thinks Republicans are afraid to take on Limbaugh, Powell pointed out that several prominent Republicans have criticized Limbaugh but that "within 24 hours, they were backing away because there is a strong base of support for Mr. Limbaugh."

Powell discussed his reaction to the news that then-Sen. Barack Obama had won the presidency.

Powell was in Hong Kong to speak to Chinese leaders, and it was late morning in Hong Kong when the final votes were cast in the United States.

The former top diplomat also had some advice for now-President Obama.

"Everybody comes into office -- the new president -- and they're told by everybody 'You've got to get it all done in the first year.' Or 'the first hundred days are important,'" Powell said. " ... You have to have a main attack, as we say in the military. You have to make sure you're focusing on things that are most important. Not try to have a dozen main attacks at once because you end up sort of frittering your energy and your troops.

"Now President Obama is out there trying to solve all of the problems he said he would solve. And I think that he and his staff over time will start to do a better job, in my judgment, of setting priorities."

Powell didn't limit his advice to the president. He also offered counsel to his party.

"If the party is going to succeed in the future, the advice I'm giving to my Republican friends is you've got to find some way to reach out and draw moderates and independents more toward the right so that we can build a party that will win," Powell said. "A base, as I've said before -- the base is no particular use if all you can do is sit on it and you can't build on it."