WASHINGTON (CNN) -- A challenge that President Obama made to his Cabinet in April resulted in cost-cutting measures that more than doubled the original $100 million target, his administration said Monday. 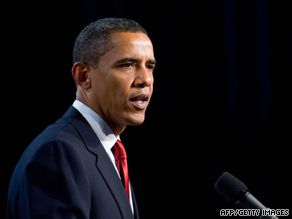 President Obama challenged his Cabinet in April to find $100 million in savings in 90 days.

At his first Cabinet meeting, Obama asked Cabinet members to find $100 million in savings in 90 days. The deadline passed last week with no announcement, and the White House responded to reporters that information was being compiled.

The Office of Management and Budget announced the results Monday, saying Cabinet members identified $243 million in savings through the end of next year.

The Defense Department had the bulk of the big-ticket items. Replacing the standard jet fuel used by the military with commercial jet fuel was expected to save the Air Force more than $51 million, the report said. Increasing the number of soldiers per chartered aircraft going on leave was estimated to save the Army more than $33 million, it said.

The Department of Homeland Security was expected to save $47,000 by consolidating subscriptions to professional publications and newspapers, while the media relations office at the National Highway Traffic Safety Administration was expected to save $2,000 by using electronic copies of daily newspaper clippings instead of hard copies.

"These savings reflect the president's belief that even small savings can add up," Budget Director Peter Orszag said in a message on the OMB Web site.

Orszag added that the White House would continue to work with federal agencies "to identify further savings as part of the 2011 budget process," with hopes that such steps "will start to instill a culture of cost-savings and care when it comes to using taxpayer dollars."

After Obama made the challenge to the Cabinet, critics said $100 million in savings would be a small amount in the context of the federal budget and a $787 billion stimulus bill that Obama signed in February.

"Any amount of savings is obviously welcome," Senate Minority Leader Mitch McConnell, R-Kentucky, said in April. "But [$100 million is] about the average amount we'll spend every single day just covering the interest on the stimulus package that we passed earlier this year."

Obama has faced Republican criticism about stimulus spending, and Republicans and fiscally conservative "Blue Dog" Democrats are fighting health care reform proposals that would cost an estimated $1 trillion over the next 10 years.