Palin steps down as Alaska governor

FAIRBANKS, Alaska (CNN) -- Former vice presidential candidate Sarah Palin gave her final speech as Alaska's governor Sunday before stepping down from her post, telling a Fairbanks crowd that she is resigning "to chart a new course to advance the state." 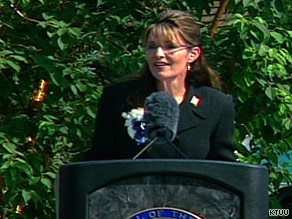 Sarah Palin told a crowd in Fairbanks that she accomplished what she had promised as governor.

"Now people who know me, they know how much I love this state ... I feel it is my duty to avoid the unproductive, typical, politics-as-usual, lame-duck session in one's last year in office," Palin said, just moments before Lt. Gov. Sean Parnell was sworn in as governor.

"With this decision, now I will be able to fight even harder for you, for what is right and for the truth," Palin continued. "And I have never felt you need a title to do that."

Palin -- interrupted briefly by a heckler -- devoted much of her last address to a rundown of her accomplishments as governor, including winning legislative approval for a massive natural gas pipeline and governing "with fiscal restraint."

"What I promised, we accomplished," she told the mostly supportive crowd.

Palin has been a polarizing figure in the Republican Party since August, when then-presidential candidate John McCain made her his pick for vice president. At the time, little was known about the first-term governor. Within days, Palin's face and strong personality was splashed across newspapers, magazines and tabloids.

The 45-year-old mother of five startled the political world earlier this month with her announcement that she was resigning as Alaska's governor. The decision to step down a year and a half before her term ends and her often-disjointed July 3 resignation speech fueled days of debate among political analysts.

She has attributed the decision to tremendous pressure, time and the financial burden of a litany of ethics complaints in the past several months. The complaints were without merit and took away from the job she wanted to do for Alaskans, Palin has said.

On Sunday, Palin recalled promising ethics reform as a gubernatorial candidate, saying, "We promised it, and now it is the law."

"Ironically, it needs additional reform to stop blatant abuse from partisan operatives," she added. "I hope the lawmakers will continue that reform."

A nationwide poll released Friday indicates that a majority of Americans have an unfavorable view of the outgoing governor. But the ABC News/Washington Post survey also suggested that seven out of 10 Republican voters maintain a positive opinion of Palin.

Fifty-three percent of those questioned in the poll view Palin negatively, with four in 10 holding a positive view of her. The survey suggests that among those respondents, there is doubt about Palin's leadership skills and her understanding of intricate issues.

Fifty-seven percent said they don't think Palin understands complex issues, and 54 percent do not feel she is a strong leader.

Palin opened her Sunday speech with what she called "some straight talk," taking on the media and then Hollywood.

"So how about in honor of the American solider you quit making things up?" she added, without elaborating.

She also warned against "anti-hunting, anti-Second Amendment circuses from Hollywood" that use "delicate, tiny celebrity starlets" to push their cause.