ANCHORAGE, Alaska (CNN) -- Alaska Gov. Sarah Palin was met with a fairly warm reception at a picnic in Anchorage on Saturday, a day before she steps down as the state's governor. 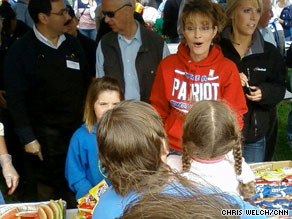 Alaska Gov. Sarah Palin visits her hometown of Wasilla two days before stepping down from her post.

Supporters displayed signs, including "Palin 2012" and "Palin, you're as great as Alaska." The few dissenters in the crowd said they wanted to come down and see what the hoopla was about.

Palin and Lt. Gov Sean Parnell, who will replace her, passed out burgers and hot dogs at the food line. Media and the crowd were kept at a distance, and were often pushed back by security officers and Palin's personal handlers.

The governor will transfer gubernatorial power to Parnell in Fairbanks on Sunday.

A day earlier, Palin attended a picnic in Wasilla.

"This being my last time to speak to the valley community as your governor, I do want to tell you sincerely that I love you," Palin said.

There were shouts of "We love you Sarah!" and "Sarah Palin in 2012" over the applause as she finished speaking at the evening event Friday, which paid tribute to the troops.

Watch a talk about Palin's future »

A nationwide poll released earlier Friday indicates that a majority of Americans have an unfavorable view of the outgoing governor. But the ABC News/Washington Post survey also suggested that seven out of 10 Republican voters maintain a positive opinion of Palin.

Fifty-three percent of those questioned in the poll view Palin negatively, with four in 10 holding a positive view of her.

The survey suggests that there is doubt about Palin's leadership skills and her understanding of intricate issues.

Fifty-seven percent said they don't think Palin understands complex issues, and 54 percent do not feel she is a strong leader.

Palin caught the political world by surprise when she announced that she will resign at the end of July.

She attributed the decision to tremendous pressure, time and the financial burden of a litany of ethics complaints in the past several months.

The complaints were without merit and took away from the job she wanted to do for Alaskans, Palin has said.

All About Sarah Palin • Wasilla