King: What will triumph in health care push -- reform or recess? 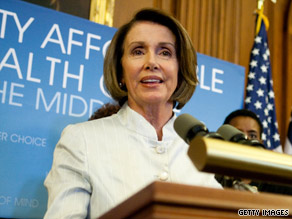 (CNN) -- Something old and something new to watch this week: The continuing -- some say languishing -- health care debate, and the launch of the "Cash for Clunkers" program designed to improve the nation's fuel efficiency, not to mention Detroit's bottom line.

"Busy week," was the understatement of a top House Democratic leadership aide as he looked ahead.

Passing health care reform by the end of this week "remains our intention," said the leadership aide.

Translation: the once firm House deadline is in danger, despite Speaker Nancy Pelosi's outspoken confidence.

"When I take this bill to the floor, it will win," Pelosi told us on "State of the Union."

Just when she will take it to the floor is THE question.

Energy and Commerce Committee Democrats meet Monday in another attempt to resolve differences between liberal and conservative Democrats, and the plan is for the committee to "mark up" legislation Tuesday with an eye on committee passage later in the week.

If that schedule is kept, the next challenge would be reconciling that product with the bill already passed by two other House committees.

See the leading plans, the sticking points and the key players of the health care debate »

Moderate Democratic Rep. Jim Cooper of Tennessee predicts Pelosi won't get her wish of House action before the August recess.

"I believe the American people want to take a closer look at this legislation," Cooper said on the CBS program "Face the Nation."

"They want to feel comfortable with it, and I think most members of the House and Senate want the same thing. We're still in the earlier stages of drafting reform. We have a long way to go."

Talks continue in the Senate, as well, and the goal in the Finance Committee is a proposal that can attract a modest amount of Republican votes. There are huge questions, however, about whether the compromises most believe necessary to get a significant number of Republicans on board would produce a bill acceptable to the White House, never mind House liberals who are highly suspicious of the Senate talks.

"Look, there are not the votes for Democrats to do this just on our side of the aisle," Conrad said on ABC's "This Week."

The president will work throughout the week looking to shape public opinion in the health care debate, including two stops in traditional "red" states that he turned blue in last year's election: Virginia and North Carolina.

Michelle Obama will open her week in Bowling Green, Virginia, for a health care event.

Also of note in the days ahead:

• The Cash for Clunkers program offers up to a $4,500 credit toward the purchase of a new, fuel-efficient vehicle. It begins Monday, and the level of interest this first week will speak volumes as to its potential to help the moribund US auto industry.

• U.S.-China relations are in the spotlight as the president leads a high-powered U.S. delegation into two days of talks in Washington.

• The Senate Judiciary Committee will send Judge Sonia Sotomayor toward her confirmation vote in the full Senate.

• U.S. Pacific Command chief Admiral Timothy Keating is in Washington this week, including a Tuesday media briefing that could shed light on the political and military situation in North Korea.

• And watch the visit of Defense Secretary Robert Gates to Israel. Several more top U.S. administration officials and envoys are to follow, for talks on Iran but also over U.S. displeasure with Israeli settlement construction.