WASHINGTON (CNN) -- On April 20, President Obama challenged his Cabinet to cut $100 million in spending over the next 90 days. 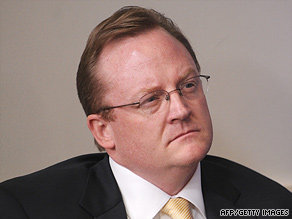 The deadline came -- and went -- without a report from the White House on whether or not that promise was fulfilled.

"Those are being reviewed now, and we'll release something in the coming days," Gibbs told the daily White House briefing.

At time the challenge was announced, critics said $100 million in savings was a small amount on the context of the federal budget.

"Any amount of savings is obviously welcome," Senate Minority Leader Mitch McConnell, R-Kentucky, said in April. "But [$100 million is] about the average amount we'll spend every single day just covering the interest on the stimulus package that we passed earlier this year."

In April, Gibbs insisted that ordinary Americans nevertheless would appreciate the savings effort.

The issue is a sensitive one for Obama at a time of fierce Republican criticism about increased government spending for the economic stimulus plan.

Republicans also oppose health care reform proposals by Democrats that would cost $1 trillion or more over the next 10 years.

Obama is pushing for fast congressional action on a health care overhaul.

All About The White House • Federal Budget