(CNN) -- As President Obama steps up his push for health care reform, there is a growing effort to stop it, and rising doubts about how Obama is handling the issue. 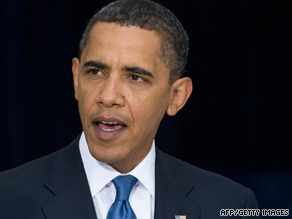 President Obama says there is no time to delay on health care reform.

The president said from the first day of his administration that health care was a top domestic priority, and some observers say he's taking a risk in addressing the nation through a primetime news conference Wednesday with little to show after months of wrangling.

Obama and top Democrats are seeking an overhaul to ensure that health insurance is available to the 46 million Americans currently without coverage while preventing costs to both the government and individuals from continuing to climb.

Obama had set a deadline for passage of a bill before the August congressional recess, but in an interview Monday with PBS' Jim Lehrer, the president said that if Congress tells him it's "going to spill over by a few days or a week," that's fine.

But the battle over health care reform is weighed down by complex problems, competing interests, a $1 trillion price tag, conservative Democrats in sticker shock and Republicans far from eager to sign on to the proposed plans.

Even among Democrats, there's no consensus. In the House, they want a surtax on the rich. In the Senate, the Finance Committee chairman wants to tax health care benefits. And some conservative Democrats are voicing concerns after a new budget analysis by the nonpartisan Congressional Budget Office revealed the leading Democratic health plans will increase the debt and not provide the savings Obama promised.

House Energy and Commerce Committee Chairman Henry Waxman canceled his committee's health care markup for the day in order to continue negotiating behind closed doors with the conservative Blue Dog Democrats, who don't think their party's bill does enough to cut medical costs.

Obama on Tuesday was scheduled to meet with Democrats on the committee, including some of the Blue Dogs who are wary of the current proposals.

"With Obamacare on the ropes, there will be a temptation for opponents to let up on their criticism, and to try to appear constructive, or at least responsible. There will be a tendency to want to let the Democrats' plans sink of their own weight, to emphasize that the critics have been pushing sound reform ideas all along and suggest it's not too late for a bipartisan compromise over the next couple of weeks or months.

"My advice, for what it's worth: Resist the temptation. This is no time to pull punches. Go for the kill," he wrote.

Louisiana Gov. Bobby Jindal said Tuesday that lawmakers should refocus on "things that actually reduce the cost of care."

"Let's address the problems with our insurance marketplace. Let's make insurance companies cover the sick. Let's make coverage affordable across state lines. Why should coverage be tied to your employment? You should be able to buy health care, whether it be through your church, your union, your bowling league. It shouldn't just be tied to employment," he said.

Obama accuses his GOP critics of putting politics ahead of policy, following remarks from Republicans like South Carolina Sen. Jim DeMint, who said that "if we're able to stop Obama on this, it will be his Waterloo. It will break him."

Asked about DeMint's comments, Obama told PBS that some Republicans view the effort to overhaul health care as the GOP did in 1993 and 1994, when then-President Clinton unsuccessfully tried to reform the system.

Defeating health care under Clinton, Obama said, was "a pure political play, a show of strength by the Republicans that helped them regain the House."

CNN's senior political analyst David Gergen, who was an adviser to several former presidents including Clinton, says there are some parallels to the health care fight 15 years ago.

"Back in '93, '94, there were Republicans, like Bob Dole, who were prepared to ... work out a bipartisan solution. That fell apart over time," Gergen said. "And Republicans then gathered in opposition, and, indeed, it did help to defeat the health care effort at that time."

"But the danger for President Obama now is that there is another parallel. And that is that the Clinton plan started out as very popular, but, over time, support for it crumbled in the public. And the danger for the president now is that support is beginning to crumble for it, the overall effort," Gergen added.

Republican strategist Karen Hanretty says it's not the poll numbers that the president needs to worry about.

"The poll numbers aren't going to slow down the president. The moderate Democrats in the House and Senate are going to slow him down, and, in fact, they are. That's why he doesn't have this bill yet," she said.

"These people have to go to their districts next year, campaign. They don't want to campaign on a platform of increasing the deficit, lowering your health care benefits or your access or the quality of care."

But, Hanretty said, a majority of Americans do want health care reform, and there's still hope that the Senate could work out a deal with some moderate Republicans that the president can support.

Still, top administration officials have conceded that more work is needed to ensure that whatever bill eventually gets passed by Congress doesn't increase the federal deficit.

CNN's Candy Crowley and Ed Henry contributed to this report.