Commander in Afghanistan was 'embarrassed' by removal

WASHINGTON (CNN) -- Gen. David McKiernan was "dismayed, disappointed, and more than a little embarrassed" when he was ousted as the commander of NATO forces in Afghanistan, he said at his retirement ceremony Wednesday. 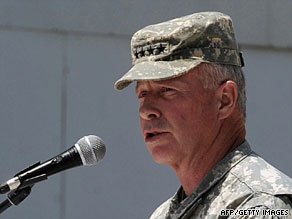 Gen. David McKiernan was ousted as the commander of NATO forces in Afghanistan after nearly a year on the job.

McKiernan took over the post of International Security Assistance Force Commander in June 2008. Just a year into his appointment, however, Defense Secretary Robert Gates asked for McKiernan's resignation, citing a need for "new thinking and new ideas" in Afghanistan.

"If you had asked me 30 days ago if I would be here today at my retirement ceremony, I probably would have said no, maybe in a bit stronger terms. Make no mistake -- I was dismayed, disappointed, and more than a little embarrassed," McKiernan said. The ceremony was held at Fort Myer, not far from the Pentagon.

But he eventually came to realize "it's about paying respect to your profession," he said, telling his supporters to "save your condolences for those who really need them -- the families, friends and comrades of men and women who either will not return home, or whose lives have been permanently scarred by war."

"He has handled everything the Army and his commander in chief have thrown at him with supreme professionalism, intelligence, and dedication to our nation, and the men and women under his command," Gates said.

He also credited McKiernan with ably leading "a vast international military effort to secure and rebuild a country and a people who have suffered from decades of deprivation and conflict."

Gates recommended Army Lt. Gen. Stanley McChrystal, director of the Joint Chiefs of Staff, to replace McKiernan. McChrystal was installed in the post, and promoted to full general, last month.

Prior to assuming his post in Afghanistan, McKiernan commanded all coalition and conventional ground forces that attacked into Iraq in 2003.