WASHINGTON (CNN) -- Iran's crackdown on protests after its disputed presidential election has "shifted" its prospects for direct talks with the United States, but they remain on the table, Secretary of State Hillary Clinton said Wednesday. 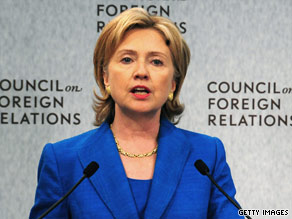 The Obama administration has held open its offer of talks with Iran -- which has not had diplomatic relations with Washington since 1980 -- despite the clampdown on protesters in Tehran and other cities.

Clinton said that offer remains the "best vehicle" for engaging Tehran -- but as President Obama said last week, she said it "will not remain indefinitely."

"Neither the president nor I have any illusions that dialogue with the Islamic Republic will guarantee success of any kind, and the prospects have certainly shifted in the weeks following the election," Clinton told an audience at the Council on Foreign Relations.

"But we also understand the importance of offering to engage Iran and giving its leaders a clear choice -- whether to join the international community as a responsible member or to continue down a path to further isolation," she said. "Direct talks provide the best vehicle for presenting and explaining that choice."

Iran has refused international calls to suspend its production of enriched uranium, which it insists will be used to fuel civilian nuclear power plants. Clinton said Iran has the right to a peaceful nuclear program "if it re-establishes the confidence of the international community" that its nuclear technology will not be put to military use.

"The choice is clear -- we remain ready to engage with Iran, but the time for action is now," she said. "The opportunity will not remain indefinitely."

Clinton said the United States has been "appalled" by Iran's crackdown on protesters who accused the government of rigging the June 12 election, in which hardline incumbent President Mahmoud Ahmadinejad was re-elected. But, she said, "we know that refusing to deal with the Islamic Republic has not succeeded."

Clinton's remarks came during a wide-ranging speech on the administration's international policy priorities, which she said will involve "a more flexible and pragmatic posture" than the Bush administration.

Watch more on Clinton's role in the Obama administration »

"Standing firm on our principles shouldn't prevent us from working together where we can," she said. "So we will not tell our partners to take it or leave it, nor will we insist that they're either with us or against us. In today's world, that's global malpractice."

She said promoting development will be one of the "core pillars" of the new administration, and the State Department will make sure that U.S. aid is used "effectively and with tangible results."

"Let's face it, we have devoted a smaller percentage of our government budget to development than almost any other advanced country, and too little of what we have spent has contributed to genuine and lasting progress," she said.

She said development aid is particularly important in Afghanistan, where U.S. and allied troops battle a resurgent Taliban, the fundamentalist Islamic militia that ruled most of the country before its al Qaeda allies attacked New York and Washington in 2001.

"To eliminate al Qaeda, we must also fight the Taliban," she said. But she said the United States knows that not everyone who fights alongside the Taliban supports their "extreme policies" or al Qaeda.

"We and our Afghan allies stand ready to welcome anyone supporting the Taliban who renounces al Qaeda, lays down their arms and is willing to participate in the free and open society promised in the Afghan constitution," she said.