(CNN) -- President Obama is not shy about showing off his jump shot on the basketball court, but on Tuesday night, it was his baseball skills that were put to the test. 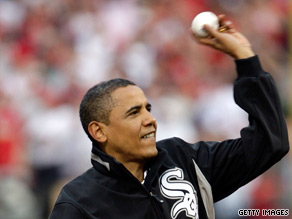 President Obama throws out the first pitch at the 2009 All-Star Game onTuesday in St Louis, Missouri.

Obama became the fifth president to throw out the first pitch at an All-Star Game, but the first in 33 years. He is following in the footsteps of Franklin D. Roosevelt, John F. Kennedy, Richard Nixon, and Gerald Ford.

Asked about plans to practice before the game, Obama said Tuesday, "I want to loosen up my arm a little bit."

"The last time I threw a pitch was at the American League championship series, and I just wanted to keep it high," the president said of his opening pitch at the 2005 Chicago White Sox-Anaheim Angels game.

"Throw it with some force, don't lob it in there. Try to get a good downhill plane. Try to keep it in the strike zone," said Blood, who will be at the game Tuesday.

HLN sports anchor Larry Smith, who has thrown out a few first pitches, says Obama has to be careful to "not try to overpower it."

"There's no speed gun on this. Just make it a nice solid throw to the catcher," Smith said. "The one thing he doesn't want to do is bounce it home. Mr. Obama is pretty athletic, so I think he'll ace this."

Overpowering it shouldn't be an issue for the president, who joked Tuesday that he'd be surprised if his 2005 pitch exceeded 30 miles per hour.

The president also needs to make sure he uses his whole arm, Blood said.

"You'll see a lot of people throw kind of out front. Their elbow will start out front and they'll never get their arm back behind their body, and won't get a full arm swing. It will be real short, and not very rhythmic," he said.

Former Major League Baseball pitcher Jim Bouton said Obama's at the top of his game, and he can "afford to take a few chances."

"He should toss it a little further to the left. The righties are down by 15 runs in the ninth, they've got no team leadership. They're fighting with each other in the opposing dugout," he joked.

All kidding aside, Obama should "just go with his instincts, like any good athlete," Bouton said. "You don't want to throw the ball into the ground or behind you, that's for sure."

Obama also doesn't want to do what Cincinnati Mayor Mark Mallory did in his opening pitch for the Reds 2007 season. He missed home plate by 30 feet. Video of the Democratic mayor's embarrassing throw has been viewed nearly 2 million times on YouTube.

But the opening pitch isn't always a light-hearted moment. President Bush described his opening pitch at Yankees stadium during the 2001 World Series as "the most nervous moment" of his presidency so far. The game came less than two months after the September 11 terrorists attacks.

Bush wore an FDNY jacket to pay tribute to the New York City Fire Department. He stepped onto the pitchers mound, and before a cheering crowd of nearly 60,000, he threw a strike. The crowded erupted in chants of "U-S-A, U-S-A."

Before the game Tuesday night, Obama and all of the living former presidents will appear in a community service video. After the video is shown, Obama will take the field at Busch Stadium and greet the six St. Louis Cardinal Hall of Fame players. He then will throw his pitch to Cardinals' all-star first baseman Albert Pujols.

Major League Baseball said the president will wear a specially made glove for his appearance, with a script Obama 44 and an American flag on it. The glove will then be sent to the Baseball Hall of Fame in Cooperstown, New York.

If Obama has butterflies about his pitch, Blood says the president should use the nervous energy to his advantage.

"For Obama, I'm sure he's dealt with much more pressure than throwing out the first pitch at a baseball game, but I would -- instead of seeing it as pressure -- I would think of it as an exciting opportunity and turn the nervousness into positive adrenaline," he said.

All About Barack Obama • Baseball