WASHINGTON (CNN) -- After weeks of meeting senators and preparing for tough questions, Sonia Sotomayor on Monday begins the formal hearings on her nomination to become the nation's first Hispanic Supreme Court justice. 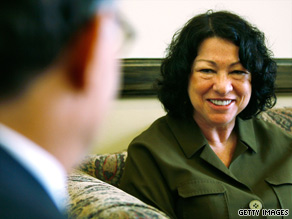 The Senate Judiciary Committee will start considering whether Sotomayor should be the 111th person to sit on the nation's highest court.

The confirmation hearings start at 10 a.m. Monday ET. If confirmed, she would be the third woman justice. Watch Sotomayor hearings on CNN.com/live

Sotomayor, 55, received a good-luck telephone call Sunday from President Obama, according to a White House statement.

Obama "complimented the judge for making courtesy calls to 89 senators in which she discussed her adherence to the rule of law throughout her 17 years on the federal bench," the statement said. "The president expressed his confidence that Judge Sotomayor would be confirmed to serve as a justice on the Supreme Court for many years to come."

Democrats who hold a majority in both the Judiciary Committee and the full Senate predict she will easily win approval from both.

Sen. Charles Schumer of New York said Sunday on NBC's "Meet the Press" program that he expected her to receive more support than Chief Justice John Roberts, who was nominated by then-President George W. Bush.

Watch a preview of Sotomayor hearings »

Republicans have promised a fair but thorough hearing, shying away from threats of a filibuster to try to block the nomination due to the filibuster-proof 60-seat Senate majority held by the Democratic caucus. A few have said they intend to vote against her nomination when it reaches the full Senate.

On Sunday, Sen. Jeff Sessions of Alabama, the ranking Republican on the Judiciary Committee, appeared on the CBS program "Face the Nation" to outline concerns over what he called Sotomayor's possible racial bias.

"When you show empathy toward one party ... you show bias toward another," Sessions said.

Appearing on the same program, Judiciary Committee chairman Sen. Patrick Leahy of Vermont said such Republican criticism of Sotomayor was inspired by politics rather than substantive issues.

"She has a track record and she has shown to be a mainstream judge," Leahy said Sunday on "Face the Nation" in response to Sessions. "Anything else is nitpicking and gives the impression that a lot of people were going to oppose anybody that Obama came up with."

Watch analyst say, "The issue will be her ideology" »

For her part, Sotomayor spent recent weeks in a tiny, plain office in the Eisenhower Office Building next door to the West Wing of the White House to prepare for the confirmation hearing.

Still in a cast because of a broken ankle she suffered a week after Obama nominated her, Sotomayor has undergone test questioning and also spent time on her own reviewing cases and other materials, sources close to her say.

The hearings are expected to last no more than a week, with time for an opening statement from the nominee, and perhaps two days or more of questioning from senators. No vote by the full Senate -- the last step in confirmation -- has been scheduled, but Obama said he wants Sotomayor on the high court in time for the start of its next session in September.

The Bronx-born judge, who sits on the U.S. Court of Appeals for the Second Circuit, met privately and separately with senators in the weeks following her nomination.

Those who have survived the confirmation process say it is not much fun. Several current and past justices have noted the seemingly endless preparation work, reviewing past cases, speeches and other aspects of professional life.

"They can ask you about any part of the law," said Thomas Goldstein, a leading Washington appellate attorney and founder of scotusblog.com. "And she's got to be ready for that and be able to sound intelligent answering those questions."

White House officials past and present have been careful to note they do not tell the nominee what to say, but will often advise them about how to frame an answer, or caution them about saying too much.

"She has to maintain her judicial independence in a very political process," said Goldstein. "So it's a delicate dance and it involves an army of people."

In nominating Sotomayor, the White House focused on her biography: the daughter of Puerto Rican parents, the sacrifices her mother made for her children, living for a time in a Bronx housing project, an Ivy League education and her volunteer work for legal and charitable causes. iReport.com: Share your thoughts on the Sotomayor hearings

Republicans say they will question Sotomayor about her views on affirmative action, gun rights and whether her Latina heritage would unfairly affect her judicial rulings.

Sessions and other leading Republicans have cited past rulings or statements by her that they say raise questions about her adherence to judicial neutrality.

"In a number of speeches, she has advocated a view that your personal experiences and even your prejudices will influence your decisions," Sessions said Sunday. "She's going to have to answer that."

If history is a guide, Sotomayor appears certain to get Senate approval with mostly Democratic support. When she won Senate confirmation for the federal appellate court in 1998, there were 29 "no" votes -- all cast by Republicans.