(CNN) -- President Obama has ordered national security officials to look into allegations that the Bush administration resisted efforts to investigate a CIA-backed Afghan warlord over the killings of hundreds of Taliban prisoners in 2001. 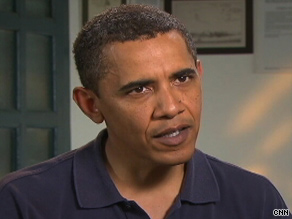 In an exclusive, CNN talked with President Obama in Ghana about his order to review alleged deaths of Taliban.

"The indications that this had not been properly investigated just recently was brought to my attention," Obama told CNN's Anderson Cooper in an exclusive interview during the president's visit to Ghana. The full interview will air 10 p.m. Monday.

"So what I've asked my national security team to do is to collect the facts for me that are known, and we'll probably make a decision in terms of how to approach it once we have all of the facts gathered up," Obama said.

The inquiry stems from the deaths of at least 1,000 Taliban prisoners who had surrendered to the U.S.-backed Northern Alliance in late 2001.

The fighters were in the custody of troops led by Gen. Abdul Rashid Dostum, a prominent Afghan warlord who has served as chief of staff of the country's post-Taliban army.

Dostum, a former communist union boss and militia leader who fought against the U.S.-backed mujahedeen in the 1980s, is known for switching sides as Afghanistan's political conflict has evolved. When the United States invaded Afghanistan after the September 11, 2001, attacks on New York and Washington, Dostum sided with the Americans and received military and CIA support to battle the Taliban.

The allegations against him first surfaced in a 2002 Newsweek report, which cited a confidential U.N. memo saying the prisoners died in cramped container trucks while being transported from their Konduz stronghold in northern Afghanistan to Sheberghan prison, west of Dostum's stronghold at Mazar-e Sharif.

At the time, the Boston, Massachusetts-based group Physicians for Human Rights said it found a mass grave in nearby Dasht-e Leili, where witnesses said the bodies of Taliban prisoners were buried. The finding prompted U.S. Gen. Tommy Franks, who led the invasion of Afghanistan, to support an investigation into the allegations.

State Department officials recently have tried to derail Dostum's reappointment as military chief of staff to Afghan President Hamid Karzai, the newspaper reported, citing several senior officials who suggested the administration "might not be hostile to an inquiry."

Dostum, a key ally of Karzai, was reportedly living in exile in Turkey until last month, when he was reinstated to his post as defense minister. He had left Afghanistan over allegations that he had kidnapped Akbar Bai, a former ally turned political rival.

When asked by CNN about whether Obama would support an investigation, the president replied, "I think that, you know, there are responsibilities that all nations have, even in war. And if it appears that our conduct in some way supported violations of laws of war, then I think that, you know, we have to know about that."

Watch part of CNN's exclusive interview with the president »

Susannah Sirkin, deputy director of Physicians for Human Rights, on Sunday praised Obama "for ordering his national security team to collect all the facts in the Dasht-e-Leili massacre and apparent U.S. cover-up."

"U.S. military and intelligence personnel were operating jointly and accepted the surrender of the prisoners jointly with General Dostum's forces in northern Afghanistan," Sirkin said earlier in the week.

"The Obama administration has a legal obligation to determine what U.S. officials knew, where U.S. personnel were, what involvement they had, and the actions of US allies during and after the massacre. These questions, nearly eight years later, remain unanswered."