WASHINGTON (CNN) -- Republicans and Democrats continued to spar Sunday over how to pay for health care reform. 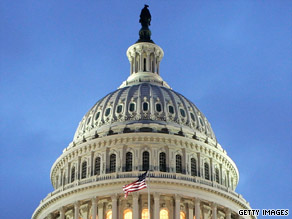 Some Democrats rejected a proposal to start taxing health care benefits provided by employers. At the same time, momentum among Democrats seems to be building for Obama's proposal to limit tax deductions for those earning more than $250,000 a year.

Republicans oppose the high cost of health care reform, as well as key components of Democratic proposals including higher taxes on the wealthy. However, some Republicans expressed support for taxing employer-provided benefits of the most expensive health insurance plans.

The bottom line: Little is clear as the White House and Democrats continue to press for a health care reform bill by the end of the year.

Democratic leaders worked over the past couple of weeks to finalize details of legislation for a Friday rollout. But the Blue Dog Coalition sent a letter late Thursday night saying the bill "lacks a number of elements essential to preserving what works and fixing what is broken."

Meanwhile, a new analysis from Congress indicates that a health care reform bill being worked up by Senate Democrats -- which includes a public insurance plan and requires employers to cover workers -- would cost $611 billion over 10 years, far less than previous estimates.

The figure is hundreds of billions of dollars less than two estimates in June by the nonpartisan Congressional Budget Office, including one that calculated the cost of a less-comprehensive program at $1.6 trillion over the same period.

In coming weeks, Senate Democrats will have to decide whether they will try to force through their plan or continue to negotiate with Republicans for a bill that would likely be less expensive and contain a much smaller role for government in the health care system.

Supporters of a government-run insurance program, including the president, have argued it would keep down costs.

Obama said in a July 2 White House statement that the latest health committee proposal "reflects many of the principles I've laid out."

Recent surveys show some support for a public option.

A CNN-Opinion Research Corp. survey released July 1 found 51 percent support Obama's health care plan, but most worry that their costs would go up, and only one in five think their families would be better off.

Health and Human Services Secretary Kathleen Sebelius told CNN's "State of the Union" on Sunday that Obama opposes taxing health benefits, but stopped short of calling it a deal-breaker for the president.

Instead, she advocated Obama's proposal to cap tax exemptions for the wealthy -- those earning more than $250,000 a year -- to the levels under Republican President Ronald Reagan in the 1980s.

The proposal would raise an estimated $330 billion, Sebelius said, which would cover most of the health care reform costs not met by reduced spending on existing programs.

"The bottom line is, it's got to be paid for, and we all have a shared responsibility that we all need to play a role," Sebelius said.

On the same program, Republican Sen. Lamar Alexander of Tennessee took the opposite stance, rejecting higher income taxes for the wealthy but calling for a new tax on the benefits of the most expensive employer-provided health insurance plans.

He and other Republicans support a plan that would give Americans cash -- initial figures suggest $5,000-$7,000 a year -- to buy their own private health insurance instead of creating a government-funded public option favored by Obama.

"If we've got a Cadillac insurance plan and your employer gives you that, then some of it's going to be taxed," Alexander said, with the new revenue helping to "give everybody a chance to buy their own health care insurance."

Republicans also contend that limiting the income tax exemptions of wealthy Americans will harm small business owners, many of whom are in wealthy tax brackets because they claim their business income on personal tax returns.

A spokesman for Senate Majority Leader Harry Reid, who met with key Republicans on July 8, said the Nevada Democrat believes it was time for opposition senators to decide if they intend to join in writing a bill or simply oppose any real reform.