(CNN) -- Sen. Roland Burris, D-Illinois, announced Friday that he will not run for a full six-year term next year. 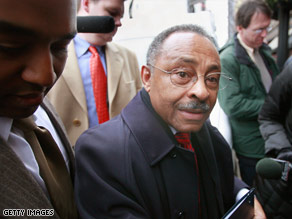 Sen. Roland Burris has been under fire since being appointed to fill President Obama's Senate seat.

"Being a United States senator today requires not only a significant time commitment to performing the job, but almost equal commitment to raising funds to run competitively for the office," he told a crowd of people at the Chicago South Loop Hotel.

As Burris emerged to speak, the crowd greeted him with cheers, urging him to run.

Burris, currently the only African-American U.S. senator, is serving the remaining two years of President Obama's Senate term, but he has never been embraced by his party's leaders in Illinois or Capitol Hill.

Burris was appointed to the seat in late December by then-Gov. Rod Blagojevich, who had been arrested on federal corruption charges for allegedly trying to sell Obama's seat to the highest bidder.

Democratic leaders urged Blagojevich not to make an appointment. He disregarded those wishes by naming Burris, a former state attorney general and state comptroller, to the seat.

Blagojevich was impeached and removed from office in January and Democrats grudgingly recognized Burris as the junior senator from Illinois. However, Burris still faced an investigation and scrutiny at the same time he was trying to learn the ropes on Capitol Hill.

In June, Sangamon County State's Attorney John Schmidt ruled that it would not charge Burris with perjury in connection with his testimony for the alleged "pay for play" scheme with Blagojevich to fill the Senate seat. Schmidt said Burris gave incomplete but truthful answers to questions about his conversations with Blagojevich's representatives.

Questions remain on who will run for Burris' seat. A top candidate for the nomination, state Attorney Gen. Lisa Madigan, announced earlier this week that she would run for re-election of her current office.

A senior Senate Republican source told CNN that Rep. Mark Kirk has told GOP leaders that he plans to run for the seat. Kirk's spokesman could not be reached for comment Thursday evening.