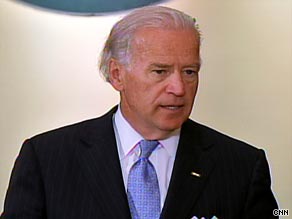 Biden said the hospital industry has pledged to contribute $155 billion in Medicare and Medicaid savings in the next decade.

"Hospitals have acknowledged that significant health care savings can be achieved by improving efficiencies, realigning incentives to emphasize quality care instead of quantity of procedures," Biden said.

"In the last several weeks, they've been working with [Senate Finance Committee] Chairman [Max] Baucus and are coming forward with a proposal that produces real savings in federal health care spending. Savings that will be applied toward the president's firm goal ... of enacting health care reform that is deficit neutral."

As the health care system becomes more efficient through technology and innovation, Biden said, increases in Medicare and Medicaid payments to hospital will slow and, as more people are insured, hospitals will bear less of the financial burden in caring for those without adequate coverage.

"Today's announcement, I believe, represents the essential role hospitals play in making reform a reality. And the reality will be we must enact this reform this year," Biden said. "We must, and we will, enact reform by the end of August, and we can't wait."

Biden was joined by Health and Human Services Secretary Kathleen Sebelius and representatives of the hospital industry.

The hospital deal follows Obama's announcement last month of an agreement reached with the nation's pharmaceutical industry to cut drug costs for elderly Americans, calling it an example of the kind of compromise required for successful national health care reform.

That agreement discounts medications for Medicare beneficiaries facing high out-of-pocket expenses when their benefits reach a gap in coverage.

"Democrats, Republicans, and health care stakeholders must work together on real reform to give Americans better access to affordable health care, but that's not happening in Washington," Boehner, R-Ohio, said in a statement.

"It's time for Washington Democrats to abandon their 'go it alone' approach and work with Republicans on true reform that expands Americans' access to affordable health care," he said.