WASHINGTON (CNN) -- Instead of celebrating the Fourth of July holiday with barbecues and sparklers, about 2,000 small-government advocates, toting signs and chanting slogans, rallied outside the U.S. Capitol Saturday. 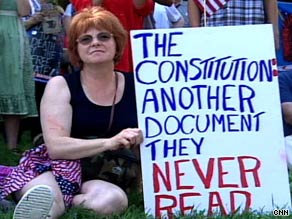 Activists said the TEA Party Day -- an acronym for "Taxed Enough Already" -- was in response to what they called runaway government spending.

They are taking to task the Obama administration's stimulus program and health care initiative, and say Congress is not giving constituents enough information about where their tax money is spent.

People at the rally expressed outrage at the $787 billion economic stimulus plan passed earlier this year, saying the bill racked up a huge national debt that will be passed onto their grandchildren. They said President Obama's push for health-care overhaul is "socialism," and believe it would negatively affect the quality of care.

"They are wasting all of our money," said Sean Albert of Richmond, Virginia. "They're not running our government like we would run our own checkbooks. When I'm out of money, I stop spending the money."

The rally followed a national effort that drew thousands of activists to TEA Party events across the country on April 15, when income taxes are due.

In Washington, people held signs saying "End the Fed," "No Socialism," and "I'll keep the freedom, you keep the change," in reference to Obama's campaign buzzword.

Organizer Lisa Miller said it was appropriate for the rally to be held on Independence Day.

"We are regular citizens speaking for our rights and it's part of taking personal responsibility for your own life," Miller said.

The activists hoped their message would reach lawmakers on Capitol Hill.

"Nobody is listening to us -- we call, we fax, we e-mail, nobody cares," said Dora Lynn Derue. "Today we're going to make them listen."