NEW YORK (CNN) -- After huffing and puffing up 354 steps to the newly reopened Lady Liberty crown, Aaron Weisinger figured it was time to pop the question to his girlfriend, Erica Breder. 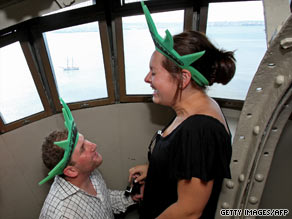 Aaron Weisinger proposes to Erica Breder on July Fourth inside the crown of the Statue of Liberty.

"The Fourth of July has always been a favorite holiday, so that was part of it, " Weisinger said.

The couple flew to New York from San Francisco, California, after managing to be among the first 240 people to snag the tickets to the Statue of Liberty crown for its reopening after September 11, 2001.

Weisinger got down on one knee inside the narrow, 8-foot-long deck inside the Statue of Liberty's crown, asked Breder to be his wife and offered her a sizeable diamond ring.

"I believe I was silent for several minutes. I was so excited," Breder said.

Then she said "yes."

Both said their families came to the United States via Ellis Island.

"My great-grandparents immigrated [from Russia and Hungary]," Weisinger said. His fiance's relatives arrived from Hungary.

"The thoughts behind the statue and freedom and liberty allowed our parents and great-grandparents before us to have the wonderful lives that we do," Weisinger added.

Breder said she was thrilled to make the long climb up a steep spiral staircase to stand inside Lady Liberty's crown.

"It was fantastic, much smaller than we had anticipated. The view's fantastic," the newly engaged Breder said.

Now, only three groups of 10 visitors per hour are guided up to the crown by a National Park Service ranger. That means only about 87,000 will be able to visit each year.

In the past, it took visitors at least an hour and a half to climb from the base to the crown. Now, it takes only about 15 to 20 minutes.

A new engineering study showed that there had to be changes to make it easier to exit the crowded staircase.

Crown tickets can now be reserved online up to a year in advance, but the statue will close again in two years for additional renovations.

All About Statue of Liberty