Palin is Alaska's 'greatest gift' to U.S., her successor says 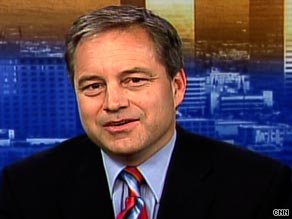 "I was very surprised at first," he said of Palin's decision to resign, which he said she told him Wednesday.

"But then as she began to explain why she was doing it, I began to see it was Sarah Palin, once again, moving to put Alaska's interest first," Parnell told CNN.

Palin, a Republican and John McCain's vice presidential running mate last year, said Friday she will step down as Alaska's chief executive by the end of the month and would not run for a second gubernatorial term in 2010.

"People who know me know that besides faith and family, nothing's more important to me than our beloved Alaska," Palin said at a news conference at her home in Wasilla.

Palin added in a statement that she was "determined to take the right path for Alaska even though it is not the easiest path."

"Once I decided not to run for re-election, I also felt that to embrace the conventional 'lame duck' status in this particular climate would just be another dose of 'politics as usual,' something I campaigned against and will always oppose."

McCain said in a statement that he believes Palin "will continue to play an important leadership role in the Republican party and our nation."

Alaska's senior U.S. senator, Lisa Murkowski, was one of the people unhappy with Palin's decision.

Watch a discussion of what's behind Palin's move »

Parnell said he accepted that others might see the governor's resignation in a different light than he does.

"She's accomplished more in these two and a half years than most governors accomplish in one or two terms," he said. "Our governor has been a great governor. She is going to be Alaska's and is Alaska's greatest gift to our country."

Watch what Parnell had to say about Palin »

The soon-to-be governor said he intended to lead the state, to make sure people have jobs and that the state's finances are stable.

"Those are the things I'm going to be dealing with," he said. He will be sworn in on July 26.

Asked whether he planned on completing the term, he said "yes."

"But I am also conscious that we don't control life, so I may be dead tomorrow, and I'm not going to commit beyond that," he said, smiling.

Parnell said he planned to run for a full gubernatorial term in 2010.