WASHINGTON (CNN) -- For the first time, U.S. Defense Secretary Robert Gates is outlining potential Obama administration plans to enforce the "don't ask, don't tell" rule selectively so that some gays could serve in the military. 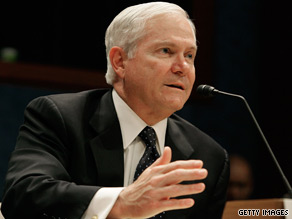 Gates said he is looking at ways to make the policy "more humane," including letting people serve who may have been outed due to vengeance or a jilted lover. The remarks appeared in a transcript the Pentagon released Tuesday.

In addition, Capt. John Kirby, spokesman for Adm. Michael Mullen, chairman of the Joint Chiefs of Staff, said Wednesday the chairman "supports the idea of a less draconian way of enforcing the policy."

Instituted in 1993, "don't ask, don't tell" ended the military's practice of asking potential service members if they are gay, but it requires the dismissal of openly gay service members.

Gates told reporters traveling with him, "One of the things we're looking at -- is there flexibility in how we apply this law?"

Gates indicated he is looking at several options. "Let me give you an example. Do we need to be driven when the information, to take action on somebody, if we get that information from somebody who may have vengeance in mind or blackmail or somebody who has been jilted?"

Gates said he has discussed the issue with President Obama and also during a meeting with his top war-fighting commanders last week.

At that military meeting, Gates said, "The issue that we face is that how do we begin to do preparations and simultaneously the administration move forward in terms of asking the Congress to change the law."

Shortly before the president's inauguration, spokesman Robert Gibbs said Obama was committed to repealing the policy. In a response to a question on the Web site Change.gov asking whether Obama would get rid of "don't ask, don't tell," Gibbs said: "You don't hear politicians give a one-word answer much. But it's 'Yes.' "

Gibbs later clarified that "not everything will get done in the beginning, but [the president is] committed to following through" with ending the policy.

During the presidential campaign, Obama said he would work to end the policy, but because it is dictated by federal law, he cannot end it unilaterally.

Five months into his presidency, Obama has been criticized for not moving fast enough to propose a repeal of the rule to Congress. Gates did not indicate the Pentagon was yet supporting a full repeal.

"What we have is a law -- be it a policy or a regulation -- and as I discovered when I got into it, it's a very prescriptive law. It doesn't leave much to the imagination for a lot of flexibility. And so one of the things we're looking at -- is there flexibility in how we apply this law?"

The secretary appears to be proposing interim measures. "If somebody is outed by a third party ... does that force us to take an action? And I don't know the answer to that, and I don't want to pretend to," Gates said. "But that's the kind of thing we're looking at to see if there's at least a more humane way to apply the law until the law gets changed."

President Clinton tried to lift the ban on gays in the military when he took office, but the military leadership strenuously opposed him.

Congress stripped Clinton of his power to change the policy and forced him to accept the "don't ask, don't tell" compromise, a law that only Congress can repeal.