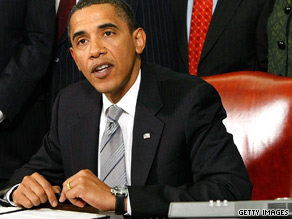 "I continue to support measures to bring the full spectrum of equal rights to LGBT Americans," the president said in a proclamation this month. "These measures include enhancing hate crimes laws, supporting civil unions and federal rights for LGBT couples, outlawing discrimination in the workplace, ensuring adoption rights, and ending the existing 'don't ask, don't tell' policy in a way that strengthens our armed forces and our national security."

But critics say it's too little, too late.

But it does not extend full health care coverage, which would require an act of Congress.

"It seems to me at least to be a nice gesture, but a disappointment," Richard Kim, a senior editor at The Nation magazine, said at the time. "It will absolutely be seen as something good. But I think, for example, it not including full health insurance, that is going to put a real microscope on that question. You know, why not?" Kim said, adding that memo applies only to federal employees, so most people will not be affected by it.

The extension of health and retirement benefits to same-sex partners is prohibited under the Defense of Marriage Act.

"President Obama's ... executive order uses taxpayer money to placate an angry portion of his base at the expense of the rule of law," Perkins said this month in a written statement. "This order raises the question of whether the president has the authority to ignore (the Defense of Marriage Act) and bypass the legislative process."

Charles Moran, the spokesman for the Log Cabin Republicans, said the lack of full benefits in the June 18 memorandum shows a lack of commitment to the gay community.

"That's the part that just shows that the Obama administration really isn't serious about their promises to the gay and lesbian community. Things like the health benefits, things like retirement benefits and coverage for spouses -- these are the core issues," Moran said.

He said Obama has had multiple opportunities to fulfill his promises to the gay and lesbian community -- including by repealing the military's don't ask, don't tell policy and standing against the Justice Department motion filed this month in support of the Defense of Marriage Act.

Obama said he still wants to repeal the act, as he advocated during last year's election campaign.

"I believe it's discriminatory. I think it interferes with states' rights, and we will work with Congress to overturn it," he said.

Obama frequently spoke in favor of gay and lesbian rights during the presidential campaign, but also has said he opposes same-sex marriage. In the run up to his inauguration, he declared himself "a fierce advocate for gay and lesbian Americans."

Given the support Obama received from the gay community during the campaign season, Kim said, so far the Obama administration has let gay and lesbian rights activists down.

Obama is the second U.S. president to recognize the community. Bill Clinton designated June 2000 as Gay and Lesbian Pride month.