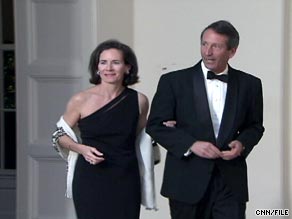 Jenny Sanford, here with her husband, was a Wall Street executive before she married Mark Sanford.

That's how friends describe Jenny Sanford, the wife of Gov. Mark Sanford, who confessed to the nation in a rambling news conference that he was having an affair with a woman in Argentina.

Jenny Sanford, unlike so many wives of cheating politicians, was not there facing the cameras, standing beside her husband.

A reporter asked the governor if he and his wife of 20 years were separated.

As romantic e-mails between her husband and his mistress were published by a local newspaper Thursday, the state's first lady, a former Wall Street executive, stayed far away from reporters. She was at the family's home on Sullivan's Island in South Carolina with her four sons and a few friends.

"Don't you know that is what Jenny Sanford is about? That is what is authentic about Jenny Sanford. She is not going to humiliate herself by standing next to a story," said Cyndi Mosteller, a friend of the Sanfords since 1992 and the former first vice chairwoman of the South Carolina GOP.

"She will stand next to Mark emotionally, but she cannot stand in the glare of others," Mosteller continued. "She is out there taking a dignified road, one that is defined by principle, even if her heart might have difficulty following that principle. But her overriding priority is to protect her children."

Jenny Sanford released a lengthy statement late Wednesday making clear she had learned of her husband's infidelity before his recent secret trip to Buenos Aires. His whereabouts were a mystery for six days, leaving his family in the dark and creating a power vacuum and considerable confusion in the Capitol, with aides telling reporters he was hiking on the Appalachian Trail.

"When I found out about my husband's infidelity I worked immediately to first seek reconciliation through forgiveness, and then to work diligently to repair our marriage," she wrote. "We reached a point where I felt it was important to look my sons in the eyes and maintain my dignity, self-respect, and my basic sense of right and wrong. I therefore asked my husband to leave two weeks ago.

"This trial separation was agreed to with the goal of ultimately strengthening our marriage. During this short separation it was agreed that Mark would not contact us. I kept this separation quiet out of respect of his public office and reputation, and in hopes of keeping our children from just this type of public exposure."

Mosteller's brother-in-law was with Jenny Sanford on Thursday as the e-mails penned to "Maria" became public. The messages from Mark Sanfordcompliment the woman on her "tan lines" and "gentle kisses."

"[The e-mails] are almost like reading a novel that you would embarrassed to buy," Mosteller said. "To be one of his four children and know that is there for the world to see, it is incredible to all of us."

Jenny Sanford grew up in Winnetka, Illinois, and earned a degree in finance from Georgetown University. She met Mark Sanford when they worked for investment firms in New York, she at Lazard Freres and he at Goldman Sachs. The two married and moved to his native South Carolina, and she managed his campaign for Congress in 1994.

"Mark started out with five other opponents, and he didn't really have a shot. That was the opinion of most people," Mosteller said. "But she and Mark worked together and turned that thing around so that candidate three, four and five ended up throwing their support behind him, and he won."

The two are equals intellectually, according to people who know them.

She went on to manage his gubernatorial campaign in 2002, turning her home into campaign headquarters.

Jenny Sanford was more than a visible first lady of South Carolina; she was involved in the finances of her husband's office to an extent that drew heated criticism from his opponents.

She also took a $70,000 deficit from the operations of the governor's mansion and put its finances into the black.

"I pretty much am in his office in the mornings most days, and I do pretty much anything he wants me to do for him. I help to bridge the gap between things that have been commonplace themes in his life and make sure everybody in the office is on pace with his agenda," Jenny Sanford told Charleston's Post and Courier in June 2005.

The governor told the newspaper that his wife is "particularly good with financial analysis [and] working with numbers."

She took up health as a key issue in her role as first lady, advocating nutrition, exercise and cancer prevention, serving on major boards and speaking at various functions to raise funds for disease research.

"This is a classy woman who lacks pretension," Mosteller said. "I took a road trip with her last year, and she just automatically got into the back seat. When we were making a lot of appearances, and the schedules were hectic, she called and said, 'I've figured out that the key is changing your deodorant.'

"Jenny is someone you can talk politics with, you can talk about grand issues with, and you can also discuss deodorant," Mosteller said. "She's a remarkable, classy woman with a lot of integrity who is trying to keep it together."