(CNN) -- South Carolina Gov. Mark Sanford told the woman with whom he was having an affair they were "in a hopelessly impossible situation of love" last year when he was thought to be under consideration for the Republican vice presidential nomination, according to e-mails obtained by The State newspaper. 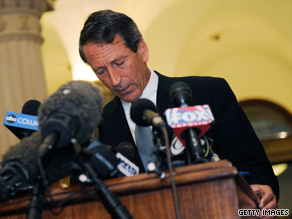 Gov. Mark Sanford speaks during a news conference at the State Capitol in Columbia on Wednesday.

The e-mails between the GOP governor and a Buenos Aires, Argentina, resident named "Maria," were exchanged in July of last year, according to the newspaper.

In one July 10 message, Sanford told the woman about his plans to take a family vacation and meet with then-Republican presidential candidate John McCain who "has kicked up the whole VP talk all over again in the press back home ..." before he veered into more emotional territory.

"You have a particular grace and calm that I adore. You have a level of sophistication that so fitting with your beauty," Sanford wrote, according to the e-mails published on the newspaper's Web site.

"...while all the things above are all too true -- at the same time we are in a ... hopelessly impossible situation of love...." he added.

"How in the world this lightening strike snuck up on us I am still not quite sure. As I have said to you before I certainly had a special feeling about you from the first time we met, but these feelings were contained and I genuinely enjoyed our special friendship and the comparing of all too many personal notes ..."

Earlier, "Maria" -- whose full name has not yet been released -- also proclaimed her devotion in a July 9 e-mail.

"You are my love ... something hard to believe even for myself as it's also a kind of impossible love, not only because of distance but situation," she wrote. "Sometimes you don't choose things, they just happen ... I can't redirect my feelings and I am very happy with mine towards you."

John O'Connor, the newspaper reporter who wrote the story about the e-mails, told CNN Wednesday afternoon that The State did not confront Sanford with the messages in December because at the time "there was little way to tell that these were authentic e-mails."

O'Connor said that given the recent events surrounding Sanford, the paper then decided to approach the governor's office with the e-mails.

Sanford, who had been considered a potential candidate for the 2012 presidential campaign, admitted the affair Wednesday.

The affair began in the last year and was discovered five months ago, Sanford told reporters without elaborating. He added he and his wife were trying to work through it.

The governor had not been seen in public since June 18. When questioned, Sanford's staff had told media outlets that he was hiking in the Appalachian Trail. But Sanford was spotted Wednesday in Atlanta's Hartsfield-Jackson International Airport.

Sanford said he had been in Buenos Aires, adding it was his fault for "shrouding this larger trip."