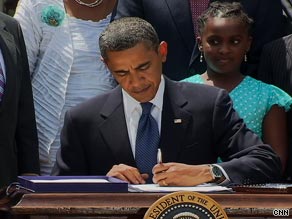 It also requires tobacco companies to reduce levels of nicotine in cigarettes.

The new law "represents change that's been decades in the making," Obama said during a bill-signing ceremony in the White House Rose Garden.

"The decades-long effort to protect our children [has] emerged victorious. ... Today, change has come."

Despite a significant decrease in the percentage of Americans who smoke in recent decades, more than 400,000 Americans still die from tobacco-related illnesses every year, the president noted. Tobacco-related health care costs exceed $100 billion annually.

Altria Group, which owns Philip Morris USA, the nation's biggest cigarette company, previously called congressional passage of the law "an important step forward." At the same time, however, it also expressed "First Amendment reservations about certain provisions, including those that could restrict a manufacturer's ability to communicate truthful information to adult consumers about tobacco products."

A narrow majority of adult Americans opposes the law, according to a Gallup Poll released Monday. Fifty-two percent of Americans -- including most smokers -- are opposed to the measure, while 46 percent support it. The survey was conducted June 14-17.

Before signing the bill, the president acknowledged the struggle that young people in particular face when they try to stop smoking.

"I know because I was one of those teenagers. I know how difficult it can be when you get started at a young age," he said.