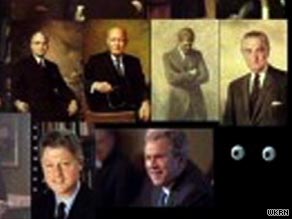 Sherri Goforth, a Tennessee state senator's aide, said she mistakenly sent the image "to the wrong list of people."

Obama's image is in the last square of a collage containing portraits of the previous 43 U.S. presidents. The e-mail, which was sent to other GOP staff members, was posted on the Internet Monday.

Sherri Goforth, an administrative assistant to state Sen. Diane Black, R-Gallatin, has admitted she sent the e-mail May 28 with the title "Historical Keepsake Photo." She said, without elaborating, that she mistakenly sent it "to the wrong list of people."

There was no comment from the White House as of Tuesday afternoon.

"I want to be sure that everyone understands that the communication was sent without my knowledge," Black said Tuesday afternoon. "It absolutely does not represent the beliefs or opinions of my office. I want to be very clear about that."

The senator said as soon as she found out about the e-mail, she consulted the Legislature's human resources office, then followed their advice.

"Ms. Goforth did get a verbal reprimand as well as a very strongly worded reprimand, written, that was put in her file that if this should ever occur again, that she would be terminated," Black said.

"This is an employee who has had a stellar record," Black said. She added that Goforth has worked in state government for more than 20 years, and has had a clean record.

A phone message left for Goforth by CNN was not answered.

"Is this indicative of what Senate Republicans think about our commander-in-chief?" asked state Democratic Party Chairman Chip Forrester in a statement posted on the party's Web site.

"I am calling on Sen. Black to reject this racist smear and fire this staffer who, on state government time, on state government computers, using a state government e-mail account, launched this bigoted attack on our president," Forrester said. "Keeping her on the staff would send the message that this type of behavior is condoned by the Senate Republican Caucus."

"This e-mail is reprehensible, insults the office of the president, and is embarrassing to all Tennesseans regardless of political party," Forrester said.

Goforth told Christian Grantham of the Web site Nashville Is Talking that she had received a letter of reprimand from her superiors but will remain on the job.

Grantham said Goforth told him she felt "very bad about accidentally sending it to the wrong list" of people. "I inadvertently hit the wrong button," Grantham quoted Goforth as saying. "I'm very sick about it, and it's one of those things I can't change or take back."

Forrester, in his Web posting, said, "Ms. Goforth does not seem to understand what she did wrong. She has apologized for 'sending [the e-mail] to the wrong list of people.' I believe that any list of people would have recognized this e-mail as offensive and hateful."

State Rep. Johnny Shaw, D-Bolivar, a member of the black and Democratic caucuses, said Goforth should be dismissed.

"I don't think a reprimand is enough. I think this lady needs to go. I don't think she should be a part of the people who represent the state of Tennessee," Shaw said.

He said Goforth and Black, as well as Republican Lt. Gov. and Senate Speaker Ron Ramsey, should make public apologies for the incident.

"I am appalled. It's despicable. It's disgusting. It should not have happened, but it does happen," Shaw said. "It is the president of our country that we're talking about."

"The last thing we need in the state of Tennessee is to send out the impression and the image that we are still stuck in some backwater mentality and culture that feels it's OK to depict the president of the United States in that fashion," state Rep. John Deberry Jr., D-Memphis, told CNN Radio.

Forrester added: "Unfortunately, Sherri Goforth's e-mail joins the list of shameful episodes by Tennessee Republicans, from the infamous 'Birds of a Feather' direct-mail piece that featured black crows with the heads of Barack Obama and [African-American] Rep. Nathan Vaughn, to the "Barack the Magic Negro" song that former Tennessee GOP Party Chairman Chip Saltsman sent to RNC members during his failed campaign for RNC chair."

All About Tennessee • Republican Party • Racism and Bigotry • Barack Obama