(CNN) -- President Obama took his health care reform push on the road Thursday, saying in Green Bay, Wisconsin, that those concerned with high costs and rising deficits should be proponents of change to an ailing system. 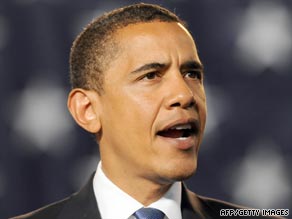 He aimed his comments at Republican opponents of Democratic-backed proposals for a government-funded national health care option intended to ensure that 47 million Americans lacking health insurance can sign up for -- and afford -- coverage.

Republican leaders and some conservative Democrats specifically oppose the government-funded plan, fearing it would lead to eventual elimination of private health insurance.

"The Democrats' emerging bill raises taxes, it rations care and puts bureaucrats instead of doctors and patients in charge of medical decisions," House Minority Leader John Boehner of Ohio said Thursday. He and Rep. Mark Kirk, R-Illinois, said an alternative to the Democratic plan will be released next week to provide a substitute for the government-funded option.

Critics also say a public option could potentially lower the quality of health care. Some fear that such a program would hurt those who have a plan they like because employers would opt for the government program if it were less expensive.

Obama acknowledged he supports what is called the national option, saying it would increase competition for private plans. At the same time, the president insisted a national plan would be one of many choices as part of reforms intended to strengthen the U.S. system.

Obama also insisted that none of the plans would be able to deny coverage on the basis of pre-existing conditions.

He noted that some facilities and places, including Green Bay, offer better medical care at a lower price than others. Related: Wisconsin no stranger to health care reform

"We have to ask why places like the Geisinger Health System in rural Pennsylvania, Intermountain Health in Salt Lake City, or communities like Green Bay can offer high-quality care at costs well below average, but other places in America can't," Obama said. He tried to sell the crowd on his "common-sense" approach to health care reform, saying that the quality of care won't diminish for any Americans.

Congress is expected to take up at least three health care proposals in coming months, as the Democratic majorities in both chambers push one of Obama's top domestic priorities.

A hearing Thursday on the first bill proposed so far -- a comprehensive version from the Senate Health, Education, Labor and Pensions Committee -- received wide-ranging reaction from an array of experts linked to health care issues

Representatives of the insurance industry, labor unions, large and small businesses, the medical industry and other parties argued the merits of proposals in the bill to require employers to provide health care benefits, mandate individual health care coverage and create a government-funded option to compete with private plans.

"We have the most expensive health care system in the world," Obama said. "But here's the thing, Green Bay: We're not any healthier for it. We don't necessarily have better outcomes."

Obama said health care reform must be tackled now, but he admitted that it will take a few years to have a new system set up.

"But if we wait, if we say, 'Well, you know, since we're not going to get it right away, let's put this off until two or four or five years from now,' it's never going to happen. That's what's been going on for the last 50 years now, people have said, 'We can't do it right now,' and as a consequence, it never gets done. Now's the time to do it," he said.

Following his remarks, Obama took questions from audience members. Obama received smiles from the audience after he called on a man who said he hoped his daughter wouldn't get in trouble for missing school to attend the town hall. The president then wrote a note for the young girl and walked over to hand it to her.

Democrats will need the votes of the conservative members of their party or Republicans to move forward with the legislation.

A compromise proposal to create privately operated health-insurance cooperatives as an alternative to a government-run health care plan is gaining steam in the Senate, several key senators said Wednesday.

The plan is shaping up as possibly the most viable way to bridge the key difference between Democrats and Republicans negotiating a health care overhaul, senators said.

The nonprofit co-ops, based on the model of electricity, agricultural and other cooperatives in rural states, would be run and paid for by its members, although an initial infusion of federal funds might be needed to get them off the ground, senators said.

But House Speaker Nancy Pelosi Thursday dismissed the idea of health-insurance cooperatives as an alternative to a government-sponsored health-care plan.

Asked at her weekly news conference whether she could support non-profit co-ops, Pelosi said, "No, not instead of a public option."

Senate Finance Committee chairman Max Baucus, D-Montana, said Obama was "interested" in the co-op idea when they discussed it at the White House on Wednesday morning.

CNN's Ted Barrett and Brianna Keilar contributed to this report.