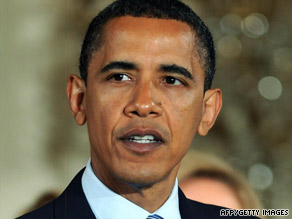 The so-called PAYGO proposal requires Congress to balance any increased spending by equal savings elsewhere, Obama said in announcing the measure that now goes to Congress.

A previous PAYGO mandate helped erase federal budget deficits in the 1990s, and subsequent ineffective rules contributed to the current budget deficits, Obama said. Now the PAYGO rules should be the law, he said.

"Paying for what you spend is basic common sense," Obama said. "Perhaps that's why, here in Washington, it's been so elusive."

Republican leaders said the proposal comes after record spending initiatives by the Obama administration, such as the $787 billion economic stimulus program.

"It seems a tad disingenuous for the president and Speaker [Nancy] Pelosi to talk about PAYGO rules after ramming trillions in spending through Congress proposing policies that create more debt in the first six months of this year than in the previous 220 years combined," said Rep. Eric Cantor of Virginia, the House Minority Whip.

However, a group of fiscally conservative Democratic representatives known as the Blue Dogs called Obama's proposal responsible and necessary.

"While short-term spending was necessary to get the economy moving again, our long-term fiscal problems became that much more urgent."

A White House statement said Obama's proposal calls for the Office of Management and Budget to maintain a ledger of the average 10-year budgetary effects of all legislation affecting mandatory spending or baseline tax levels.

Any extra cost that lacks payment authorized by Congress would require the president to find money within the budget to pay it, while any tax cut would require a corresponding increase in tax revenue.

Some costs would be exempt, including Medicare payments to doctors, the estate and gift tax, and tax cuts enacted in 2001 and 2002, the White House statement said.