WASHINGTON (CNN) -- Newt Gingrich was the keynote speaker at Monday night's fundraising dinner for the Senate and House Republican campaign committees, but it was Sarah Palin who stole the show. 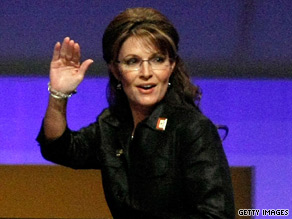 Alaska Gov. Sarah Palin waves to the crowd at the Republican fundraising dinner Monday in Washington.

The Alaska governor's last-minute appearance at the GOP's biggest fundraiser of the year ended 24 hours of speculation that the she might skip the event. A late attempt to have her speak at the dinner fell through when organizers feared she might upstage Gingrich, the onetime House speaker.

Hours before the event was slated to begin, an aide to Palin would not confirm that she would be attending. But when Palin and her husband, Todd, sauntered across the stage with Gingrich and his wife, Callista, shortly before the program commenced, their appearance was met with cheers from the audience of 2,000 party loyalists.

Sen. John McCain, who shared last year's Republican presidential ticket with Palin, greeted his former running mate as she made her way to her table. Soon after, the former GOP presidential nominee tweeted: "Great to see Sarah and Todd at the dinner tonight -- nice reunion!"

Palin did not speak at the event, but during a break in the program for dinner, Republicans clustered around the former vice presidential nominee's table near the front of the ballroom, eager to meet the governor and pose for pictures.

It was the only table in the vast ballroom that had a crowd gathered around it -- and despite their distance from Palin's table, multiple television cameras kept their lenses trained on the governor for much of the night.

The guest list included 33 Republican senators and Republican National Committee chairman Michael Steele. Sen. John Cornyn, who as chairman of the National Republican Senatorial Committee helped organize the dinner, sat with Palin and her husband during the event.

Cornyn briefly acknowledged Palin when he appeared on stage to thank his Republican colleagues for their work on behalf of the party.

Gingrich, the event headliner, also thanked Palin for attending. He said "this country would be amazingly better off" had McCain and Palin been elected.

In a lengthy speech that touched on topics ranging from health care to border security, Gingrich railed against the Obama administration's "disastrous" approach to federal spending and national security policy. He acknowledged the intra-party squabbles that have roiled the Republican party since last year's election, but he said such debates are to be expected and will never really disappear.

Gingrich held up Cheney, the former vice president, as an expert voice on national security, and he called the White House's decision to engage Cheney on the national security issues "the first big mistake" of Obama's presidency.

Pointing to last month's dueling national security speeches from Obama and Cheney, Gingrich said that Cheney laid out facts, while Obama resorted to little more than high-minded oratory. Gingrich said that like Reagan, Obama has brilliant rhetorical skills -- but unlike Reagan, he said, Obama "uses his rhetorical skills to hide from fundamental facts."

The dinner raised $14.45 million for congressional Republicans, money that will be split evenly between the Senate and House campaign committees as they seek to win back majorities in next year's midterm elections.

In its most recent financial disclosure, the National Republican Congressional Committee reported $3.69 million in the bank and $5 million in debt. The NRSC, meanwhile, entered May debt-free and reported $2.69 million in its campaign war chest.

Actor Jon Voight, an outspoken conservative who stars in the popular television series "24," emceed the event. In his opening comments, Voight blasted President Obama as "a false prophet" and "a soft-spoken Caesar" who bullies Israel and employed pleasant-sounding language to dupe the country into voting for him last November.

"Ayers, Wright, Pfleger, Alinsky," he said, listing some of the liberal figures who became flash points in the 2008 race. "It didn't matter one iota. Obama portrayed himself as a moderate, but turned out to be wildly radical."