Hillary Clinton: I said no, at first, to secretary of state job

WASHINGTON (CNN) -- When then-President-elect Barack Obama first asked Hillary Clinton to be his top diplomat, she turned him down and recommended others for the job, the secretary of state said in an interview broadcast Sunday. 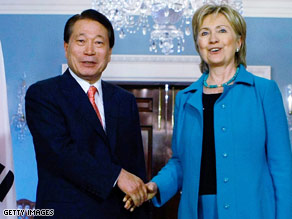 Speaking to ABC's "This Week," Clinton also said the president has answered the central question she raised about him when she was his chief rival for the Democratic nomination last year.

In her famous "3 a.m." ad, she questioned whether Obama was the right candidate to handle a middle-of-the-night international crisis.

"Has the president answered it for you?" host George Stephanopoulos asked.

"Absolutely," Clinton replied. "And, you know, the president, in his public actions and demeanor, and certainly in private with me and with the national security team, has been strong, thoughtful, decisive, I think he is doing a terrific job. And it's an honor to serve with him."

The former senator from New York and former first lady revealed details of how she came to accept the role.

"I never had any dream, let alone inkling, that I would end up in President Obama's cabinet," she said. "When I left the presidential race after getting some sleep and taking some deep breaths, I immediately went to work for him in the general election. ... And I was looking forward to going back to the Senate and, frankly, going back to my life and representing New York, which I love. And I had no idea that he had a different plan in mind."

When her name was mentioned in the media as a possible member of Obama's cabinet, Clinton said, she found the idea "absurd."

"And then when he called and asked me to come see him, and we had our first conversation, I said, 'You know, I really don't think I'm the person to do this, I want to go back to my life. I really feel like I owe it to the people of New York.' And I gave him a bunch of other names of people who I thought would be great secretaries of state."

But Obama "was quite persistent and very persuasive," Clinton said.

She added, "Ultimately, it came down to my feeling that, number one, when your president asks you to do something for your country, you really need a good reason not to do it. Number two, if I had won and I had asked him to please help me serve our country, I would have hoped he would say yes. And finally, I looked around our world and I thought, you know, we are in just so many deep holes that everybody had better grab a shovel and start digging out."

Some analysts have raised questions about how much power Clinton actually has in the administration, given that Obama and Vice President Joe Biden have done a great deal of international outreach themselves. The president has also appointed special envoys to focus on several key regions.

But Clinton said she wanted the envoys appointed "because we were inheriting so many hot spot problems that I knew you could never have one person possibly address all of that."

One of the biggest is the Israeli-Palestinian conflict. Clinton and the president have called on Israel to halt construction at settlements in the West Bank. Asked whether there is any room for compromise on that issue, Clinton said the administration would not "prejudge the effort."

She said the administration is committed to Israel's security. "We see historical, demographic, political, technological trends that are very troubling as to Israel's future. At the same time, there is a legitimate aspiration of the Palestinian people that needs to be addressed."

On the nuclear standoff with Iran, Clinton said a diplomatic process in which U.S. representatives sit down with Iran's authorized representatives would give "us information and insight that we don't have. ... We don't have any really clear sense as to what it is they are seeking."

Clinton also addressed the growing tensions surrounding North Korea, and what she called its "very provocative and belligerent behavior" with recent tests of missile and nuclear technology.

"One of the positive developments," she said, is that "it has actually brought the [other] members of [the] six-party process -- Japan, South Korea, China, Russia, the United States -- much closer together" in how they view the challenge. She said there may be additional U.N. sanctions against North Korea.

Several lawmakers have asked the president to put North Korea back on a list of state sponsors of terrorism. "We're going to look at it," Clinton said. "There's a process for it. Obviously we would want to see recent evidence of their support for international terrorism."

She emphasized that North Korea's detention of two U.S. journalists, Laura Ling and Euna Lee, is separate from the political issues. "It is a humanitarian issue and the girls should be let go," Clinton said.