WASHINGTON (CNN) -- Military hardware that can be used in nuclear devices and ground fighting can be easily purchased In the United States and shipped overseas, a government investigation revealed Thursday. 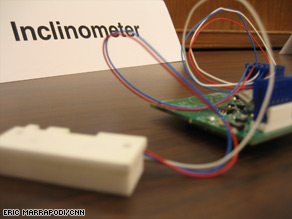 This inclinometer, which can be used in homemade bombs, was easily bought and shipped overseas.

The Government Accountability Office (GAO) watchdog agency set up fake companies to obtain military and dual use items -- which have both military and commercial use -- in the United States and ship them overseas, according to a report made public at a House subcommittee hearing.

The domestic purchases allow buyers to avoid U.S. restrictions on sales to foreign entities, it noted.

Items purchased in the bogus transactions included parts for making nuclear devices and guiding missiles that could carry nuclear warheads, as well as night-vision devices, body armor and other hardware for ground combat, said the report provided to the House Energy and Commerce subcommittee.

"There appears to be a gigantic loophole within our laws that makes it easy for our enemies to get hold of our superior military technology and use it against us," said Rep. Bart Stupak, D-Michigan.

Gregory Kutz, a GAO managing director who led the 13-month investigation, said it found "sensitive dual-use and military technology can be easily and legally purchased from manufacturers and distributors within the United States and illegally exported without detection."

He stressed that no laws were broken by any of the companies that sold items to the undercover GAO operation, and that the magnitude of trying to check all overseas travelers and shipments made it impossible to halt illegal export of the items under current law.

Committee members said the lack of regulation or export controls made the situation particularly troubling.

"The scandal here may be what is legal, not what is illegal," said Rep. Greg Walden, R-Oregon.

However, he warned against excessive regulations that could stifle necessary commerce in items used by law enforcement, medical and other industries.

Kutz held up some of the items purchased by undercover investigators, including a small device that looked like a spark plug called a triggered spark gap. The item has medical applications and can also be used to detonate a nuclear weapon, he said.

Kutz also displayed a small device called a gyro chip that can be used to steer guided missiles. Other items on display in the committee room included some used in improvised explosive devices (IEDs) that target U.S. soldiers in Iraq, as well as sophisticated body armor and night-vision devices.

Undercover investigators complied with all required checks in purchasing the equipment, Kutz said, including the submission of end-user agreements that forbid exporting the equipment or using it in any nuclear, biological and missile weapons. Such documents amount to an "honor system" pledge, rather than any enforcement mechanism, he said.

The only further checks involved are confirming the validity of credit cards and the existence of Web sites, Kutz said. Most of the transactions took place by e-mail and telephone calls.

"The kind of front company we used and the kind of scheme we used is the kind being used by terrorist organizations today," Kutz said. "This was not a hypothetical situation; this is being done."

The investigation shipped some of the dual-use items to "a country that is a known trans-shipment point for terrorist governments and foreign governments attempting to acquire sensitive technology," Kutz said.

He declined to name the country, but said it was in southeast Asia and that the shipments were simple packages labeled documents and sent by regular mail.

"As GAO proves, a cardboard box and the U.S. Postal Service is all it takes to move dual-use items out of the country," said Rep. Edward Markey, D-Massachusetts.

One of those duped by the investigation -- Nicholas Fitton, a technology dealer in Georgia -- told the committee he complied with all required checks in selling an F-16 engine computer to what he thought was a legitimate U.S. buyer.

Asked by Stupak why anyone other than the military would need such a device, Fitton said his customers often are museums, collectors and film companies seeking authentic items.

Fitton said existing regulations were counter-productive, with seemingly harmless items associated with military gear more tightly controlled than the dual-use items of the investigation. At the same time, he said, making the system too restrictive would harm the competitive ability of U.S. manufacturers.

Export laws in the United States have remained virtually unchanged since the Sept. 11, 2001, terrorist attacks, Anne-Marie Lasowski of the GAO told the committee.

She called for a "holistic" approach involving all agencies charged with security and commerce for an issue involving billions of dollars in exports.