WASHINGTON (CNN) -- The latest explanation for why Pat Tillman's Silver Star citation failed to mention that friendly fire killed the former NFL star in Afghanistan is another lie by the U.S. military, Tillman's mother said Tuesday. 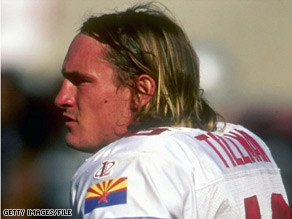 Pat Tillman died in Afghanistan in 2004 after giving up a lucrative NFL career to serve in the Army.

Mary Tillman was responding to remarks made Tuesday by the general nominated to lead Allied forces in Afghanistan, who apologized before a Senate committee for his role in the matter.

Lt. Gen. Stanley McChrystal told the Senate Armed Services Committee that he helped expedite the Silver Star award for Tillman before confirming that the Army corporal was killed by friendly fire in 2004.

Tillman's family has long complained that the memorial service, which included the Silver Star presentation, deliberately avoided mention of fratricide.

McChrystal acknowledged the problem Tuesday, calling it a mistake. He said the Silver Star citation was "not well-written" but denied any intent to mislead.

"I didn't see any activity by anyone to deceive," he said.

Mary Tillman said McChrystal knew at the memorial service that her son died from friendly fire.

"McChrystal was lying," she said of his comments Tuesday. "He said he didn't know for certain Pat was killed by fratricide. That isn't true in and of itself, but the fact is, it doesn't matter whether he knew it for certain."

Army protocol at the time required families to be told of possible fratricide, whether or not it had been confirmed, she said.

She also criticized Sen. John McCain of Arizona, the ranking Republican on the committee, who questioned McChrystal on Tuesday, for "playing dumb" by not following up on McChrystal's explanation.

"If the Army chain of command didn't know what happened to Pat, why did it present us with a false story" at the memorial service? Tillman asked. "That is not an error; that is not a misstep; that is deliberate deception. McCain was at Pat's service. He was read a false narrative like the rest of us. Where is his outrage? Did he know all along?"

Investigations by the Army's Criminal Investigations Division and the Defense Department's inspector general concluded that officers in Tillman's chain of command knew almost immediately that he had been killed by fire from his own platoon. That information, however, was withheld from his family for more than a month, in violation of Army regulations.

McChrystal, one of four generals identified in the report, was later cleared in the investigation but was faulted for not immediately notifying Tillman's family of suspicions that it was a friendly fire incident.

On Tuesday, McChrystal said the mistake in the Tillman situation involved attempts to simultaneously support the awarding of a Silver Star while investigating the reports that he died from friendly fire.

A policy to have awards approved in time to present them to families at memorial ceremonies should be changed to prevent competing pressures, McChrystal said.

"I would do this differently if I had the chance again," he said.

Asked whether he believed that Tillman earned the Silver Star before his death, McChrystal said: "I did then; I do now. ... I don't believe that the circumstance of death detracts from the courage and commitment of his contribution."

Later, Sen. Jim Webb, D-Virginia, pressed McChrystal harder on the issue, prompting the general to agree that the Army had failed the Tillman family.

"I was a part of that, and I apologize for it," McChrystal said.

All About Pat Tillman • Stanley McChrystal