(CNN) -- Former law clerks to Judge Sonia Sotomayor sent a letter of support to the Senate leadership Monday, offering their "enthusiastic and wholehearted support" for the U.S. Supreme Court nominee. 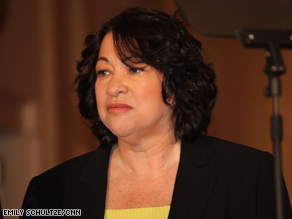 The White House said it was unable to find two of the clerks, and the two others had conflicts of interest that precluded their signing the letter.

"Our group includes federal prosecutors and other government lawyers; private law firm partners and in-house corporate counsel; and legal academics and public interest lawyers," the letter said. "Although our professional experiences are diverse, we are united in our strong belief that Judge Sotomayor is a brilliant and first-rate judge who is an ideal selection for our nation's highest court."

"The judge is a fantastic person to work for," said Zornberg, a Harvard Law School graduate who clerked in 1997-1998 and is now a U.S. attorney for the Southern District of New York. "Professionally and personally, she is a brilliant woman, she's a mentor, she's a fantastic personality."

"She's, more than anything, incredibly hard-working, incredibly conscientious," concurred Abensohn, a Georgetown Law School graduate who clerked for Sotomayor in 1996-1997 and 1998-1999 and asked her to officiate at his wedding. "Beyond being a mentor to all of her clerks professionally, personally she has been a big part of our lives."

Sotomayor, a Princeton and Yale graduate, spent six years as a district judge and a decade on the 2nd U.S. Circuit Court of Appeals.

The letter came a day after leading Senate Republicans indicated that a filibuster of Sotomayor is unlikely, though they promised to not shy away from what they characterized as her troubling judicial record.

Meanwhile, one of the Senate's top Democrats, Chuck Schumer of New York, told ABC on Sunday, "I think she's virtually filibuster-proof when people learn her record and her story."

But the GOP leadership on Sunday's political talk shows did not back away from criticizing Sotomayor.

McConnell, the Senate minority leader, highlighted her controversial remark at a 2005 panel discussion at Duke University, where she told students that the federal Court of Appeals is where "policy is made [and] where ... the law is percolating."

In addition, Republicans criticized Sotomayor's 2001 speech at the University of California at Berkeley, where she said she "would hope that a wise Latina woman, with the richness of her experiences, would more often than not reach a better conclusion than a white male who hasn't lived that life."

"It does trouble me to say that one type of old person versus another one is going to make a different or better decision," Sen. Kay Bailey Hutchison, R-Texas, told CNN's John King on "State of The Union" on Sunday.

The White House and other Democratic defenders of Sotomayor have said that her remarks have been taken out of context.

Zornberg said criticism of Sotomayor's remark was misguided. "What it says to me is that a lot of people still don't know her record," she said. "I view it as a comment that is taken out of context and that, read in context, really just says what many people acknowledge is totally noncontroversial, which is that that life experience is a benefit to the process of judging cases and decision-making, and that you don't leave your life experience at the door, that diversity on the court is a good thing."

She added that, in her experience, Sotomayor "sticks very closely to the rule of law. That's the kind of judge she is. She's moderate."

"There are ... some in Washington who are attempting to draw old battle lines and playing the usual political games, pulling a few comments out of context to paint a distorted picture of Judge Sotomayor's record," Obama said.

"No nominee should be seated without rigorous evaluation and hearing; I expect nothing less. But what I hope is that we can avoid the political posturing and ideological brinksmanship that has bogged down this process, and Congress, in the past."

CNN's Martina Stewart and Bill Mears contributed to this report.