WASHINGTON (CNN) -- Republicans kept the pressure on the president's Supreme Court pick Friday, pushing the idea that Judge Sonia Sotomayor is an activist judge who will bring a leftist agenda to the bench. 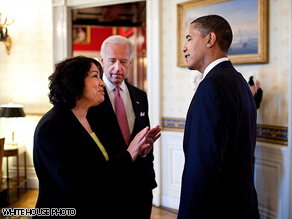 Meanwhile, the White House tried to soften remarks Sotomayor made in 2001 that have rankled conservatives, who say her assertion that her experiences as a Latina woman might make her judgments more sound than those of a white man brands her as a racist.

"I'm sure she would have restated it, but if you look at the entire sweep of the essay she wrote, what's clear is that she was simply saying that her life experiences will give her information about the struggles and hardships that people are going through that will make her a good judge," President Obama said in an interview with NBC's Brian Williams.

Sotomayor, a U.S. District Court judge who would be the first Hispanic on the Supreme Court if she is confirmed, spoke on her reflections as a Latina judge during a 2001 speech at the University of California-Berkeley Law School.

Different perspectives brought on by individual experiences, she said, create a "diversity of opinion" even within groups, and those perspectives will especially differ from the majority in a white male-dominated society.

Pointing out that studies show "women and people of color ... report in significantly higher percentages than white men that their gender and race has shaped their careers," Sotomayor said that the idea of "impartiality is an aspiration because it denies the fact that we are by our experiences making different choices than others."

Thus, she said -- in the remarks that have offended conservatives -- "I would hope that a wise Latina woman with the richness of her experiences would more often than not reach a better conclusion than a white male who hasn't lived that life."

"Let us not forget that wise men like Oliver Wendell Holmes and Justice [Benjamin] Cardozo voted on cases which upheld both sex and race discrimination in our society," she said. "Until 1972, no Supreme Court case ever upheld the claim of a woman in a gender discrimination case."

"She was simply making the point that personal experiences are relevant to the process of judge," he said, "that your personal experiences make you have a tendency to make you more aware of certain facts and certain cases, that your experiences impact your understanding. I think we all agree with that and that on a court that is collegial, that it can help others that are trying to wrestle with the facts of those cases."

Gibbs took issue with a former congressman's comparison of the Hispanic civil rights group that sponsored that speech with the Ku Klux Klan.

"It's sort of hard to completely quantify the outrage I think almost anybody would feel at the notion that you are being compared to somebody who used to be a member of the Ku Klux Klan," Gibbs said, referring to remarks made by former Republican Rep. Tom Tancredo, who condemned Sotomayor on CNN Thursday for her membership in the National Council of La Raza, an organization he called "a Latino KKK without the hoods or the nooses."

On CNN Friday, La Raza president Janet Murguia disputed Tancredo's statements about the 40-year-old group. The motto, she said, is not "All for the race, nothing for the rest," the organization is very much "mainstream," the group's name does not translate to "the race" as understood in English.

Sotomayor's remarks drew charges of racism from former House Speaker Newt Gingrich, radio talker Rush Limbaugh and others, although Republican Sen. John Cornyn of Texas said such language about the nominee was "terrible."

And former House Majority Leader Tom DeLay, also of Texas, slammed La Raza and another Hispanic civil rights organization, the League of United Latin American Citizens, as "a bunch of radical leftists that try to make the world believe that they speak for Hispanics," but said the debate about Sotomayor's background "is racist in itself."

"I am disgusted that we are considering her nomination because she is Hispanic," he told CNN. "She has a world view. She has a judicial temperament. She has a record. And that's what we ought to be looking at. It's racist in itself to have this debate."

DeLay add that "in my mind" Sotomayor is not qualified for a seat at the Supreme Court.

"She's an activist," he said. "She's a judicial activist, and I've worked my entire career against judicial activism. And if Obama -- Obama couldn't have appointed a more activist judge, and, therefore, I don't think she's qualified. I don't want somebody writing law from the bench."

Most conservatives oppose what they call "judicial activism," which they define as enacting legislation through rulings, although it generally refers to reaching beyond the U.S. Constitution to bring rulings in line with contemporary values.

Many support a "strict constructionist" judicial philosophy that requires judges to apply the text of the Constitution as written to the matters at hand, although there are differences of opinion about what the term actually means, even among conservatives.

The true opposite of judicial activism, however, is not strict constructionism, but rather judicial restraint, which urges judges to defer to Congress whenever possible.