Sotomayor nomination: Is it about ethnicity?

(CNN) -- Sonia Sotomayor could be the first Latina to serve on the Supreme Court. And as we learn more about her, the more questions centered on her ethnic background abound. Was she chosen partly because of her Hispanic origins? Does she consider race in her rulings? Are we focusing too much on her ethnicity and not enough on her judicial history? 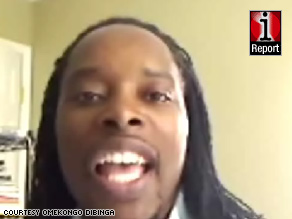 Omekongo Dibinga hopes Sotomayor will be judged by her record rather than her ethnicity.

Sotomayor is, to say the least, a provocative pick on President Obama's part. Here are four of the questions commentators are asking -- and your answers.

What role did ethnicity play in Sotomayor's nomination?

Did Obama choose Sotomayor partly because she's a Latina? Katy Brown thinks so.

"It's just another gimmick," said Brown, a college student from Charleston, West Virginia. "Just another opportunity to make something out of nothing: the first Hispanic [on the court]. ... Race is being played once again. So my question is, did he actually look at her background; did he pick her because of the right reasons? Or did he just want to make another statement in America and base his decision on race?"

But some say that even if ethnicity did factor into Obama's decision, that's OK. Frank Forrester, a lifelong Republican who switched parties to vote for Obama, says diversity is a valuable attribute for the court to have. He thinks Obama showed "good judgment" with his pick.

Others agree, saying Sotomayor is simply a reflection of the modern United States.

"As a woman and Hispanic, she brings a necessary flavor to the court that reflects what America is," said Egberto Willies of Kingwood, Texas.

"She is the new face of America," added Jimmy Deol of Toronto, Canada. "She's a woman, she's of Hispanic descent, and with her moderate liberal views, she reflects the ... diversity and mainstream views of today's America."

And Melissa Fazli thinks Obama just got lucky that someone with Sotomayor's qualifications happened to be both female and Hispanic.

"Obama has squelched all those women lobbyists and all those [Hispanic] lobbyists. You got kind of a two-for-one, didn't you?" she said. "You got a woman of Puerto Rican descent. That's huge. Obama got lucky with that one, because I would not want to see one angry because the other got chosen.

"I think Obama has made a great decision," she added.

What role will ethnicity play in her confirmation?

"I think it's important that we're making sure she is being judged on her record and not the other 'R' word: her race," said Omekongo Dibinga of Washington.

Dibinga is concerned that senators -- who must confirm Sotomayor before she can take the seat -- and the public will assume that Sotomayor's ethnic background will unfairly influence her decisions.

Robert Stewart has a different perspective. He thinks Senate Republicans will hesitate to criticize Sotomayor for fear of being accused of racism or sexism, and he called Obama's pick of Sotomayor "brilliant," partially because of the ethnicity and gender factors.

"Anyone who brings up either sex or race will set themselves up for being labeled sexist or racist, tarnishing their reputation," he wrote. "While sex/race/religion should not make a difference, we would be ignorant to not understand how this can be used by both sides, and with the Republicans in the minority in the Senate, this will certainly be brought up to discredit their opposition to Sotomayor.

"While it is often repeated and emphasized that her nomination is not based on sex/race, everyone knows that this is a card that will be played," he added.

Does Sotomayor consider race or ethnicity in her judicial decisions? Should she?

"Why, every time an [ethnic minority] comes into an office or a situation of making decisions for our country, do we get concerned about will they show favoritism?" Richard Gaskin asked. Political pundits and iReporters alike are highly divided on the validity of his question.

Sotomayor's critics argue that she has unfairly considered race when making judicial decisions. Many cite the now-famous case of 19 Connecticut firefighters who claimed that they were denied promotions despite high scores on exams because not enough minority candidates scored well. Sotomayor voted to dismiss their appeal.

And others, like Republicans Newt Gingrich and Rush Limbaugh, have called her an outright racist. They cite one line from a speech Sotomayor gave to a Hispanic group in 2001:

"I would hope that a wise Latina woman with the richness of her experience would more often than not reach a better conclusion than a white male who hasn't lived that life," she said in the speech, explaining how she thinks life experiences can influence judicial rulings.

Forrester says the remark is being taken completely out of context and calls these criticisms "blatant quote-mining." He heard the quotation on television multiple times and was shocked by it. He wanted more information on what Sotomayor meant by it, so he read the text of the entire speech online. Now, he says, people would have a different opinion of Sotomayor if they heard the quotation in the context of the rest of the speech, especially, for example, this line:

"We are a nation that takes pride in our ethnic diversity, recognizing its importance in shaping our society and in adding richness to its existence." Read the full text of the speech at NYTimes.com

Adriana Maxwell thinks it's good that Sotomayor will add diversity to the court, but she's also confident that Sotomayor will consider only the facts and the Constitution in her decisions. The Marietta, Georgia, resident says she's read some of Sotomayor's opinions and concluded that she rules cases justly, no matter who the parties are.

"She applies the law fairly, whether it's the little guy or the big guy. It doesn't matter," Maxwell said. "What does the Constitution say, and is this being applied accurately to this case? And that's it."

But Joseph Condon of Richmond, Virginia, feels that Sotomayor "will not be wearing a blindfold when [she] makes rulings." He is concerned that she would put her own beliefs and feelings above the Constitution and that perhaps her cultural background could unfairly influence her decisions. Condon had some strong words to describe his worries.

"If Sotomayor is confirmed, her personal experiences, liberal beliefs, and loyalty to blood and culture will be the basis for forming her judicial rulings, and not the United States Constitution," he wrote.

Are we focusing too much on her ethnic background rather than her judicial history and qualifications?

Sotomayor's personal story is a compelling one. She is of Puerto Rican descent and was born in the Bronx, New York. She spent much of her childhood in a housing project, where her mother worked six days a week to provide for her and her brother after her father died when Sotomayor was just 9 years old. It is inspiring that someone from this humble background could now sit on the highest court in the nation.

So, as provocative as her personal and cultural background is, are we allowing it to overshadow her judicial history and qualifications?

Forrester thinks so, and he blames it mostly on the media, which he says is "beating [the ethnicity issue] like a dead horse."

"What upsets me the most is that there are millions of people out there watching, and they're not going to go read the whole story," he added. "They're just going to believe it. So then you're going to have a bunch of people stirring up stuff."

And Gaskin -- who said that every time a minority comes into a position of power, the public unfairly worries about whether he or she will show racial favoritism -- thinks the conversation the country is having about Sotomayor's ethnicity is the wrong one to be having.

"We can now have everyone getting equal chances, and I think that's what this should be all about," he said. "No matter what ethnicity you are, now we all have a chance to have equal rights. ... I hope [Sotomayor's nomination] inspires people who come from situations of poverty or less hope to now have hope and change their lives."