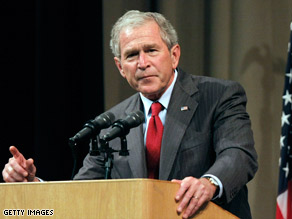 Bush told a southwestern Michigan audience of nearly 2,500 -- the largest he has addressed in the United States since leaving the White House in January -- that, after the September 11 attacks, "I vowed to take whatever steps that were necessary to protect you."

In his speech, Bush did not specifically refer to the high-profile debate over President Obama's decision to halt the use of harsh interrogation techniques. Bush also didn't mention Cheney, his former vice president, by name.

Instead, he described how he proceeded after the capture of terrorism suspect Khalid Sheikh Mohammed in March 2003.

"The first thing you do is ask what's legal?" Bush said. "What do the lawyers say is possible? I made the decision, within the law, to get information so I can say to myself, 'I've done what it takes to do my duty to protect the American people.' I can tell you that the information we got saved lives."

Bush avoided the sharp tone favored by Cheney in recent weeks and stressed he does not want to disparage Obama.

The former president was speaking to the Economic Club of Southwestern Michigan. In a change in format, he agreed to answer questions directly from the audience instead of responding to pre-submitted questions provided to a moderator.

He repeated his disclaimer about not passing judgment on Obama later when asked about North Korea's nuclear test. Before answering, the 43rd president said he is "in no way trying to shape my successor's decisions or criticize them."

"I know there are news people here, and they love conflict," he said. Bush then went on to say that diplomacy is impossible without leverage.

After his opening remarks, Bush engaged in a nearly hour-long back-and-forth with audience members that touched on nearly all aspects of his presidency, from the September 11 attacks to his ban on embryonic stem cell research, to his consultations with advisers as the economic crisis hit last year.

He strongly defended his Troubled Asset Relief Program in response to the economic crisis at the end of his presidency, calling it crucial to preventing capital markets from freezing up, which he said would have led to another Great Depression. However, he said he remains "a free-market guy."

Asked what he thinks about conservative pundits who say the Obama administration's fiscal policies are opening the door to socialism, Bush said: "I think the verdict is out. I think people are waiting to see what all this means."

The former president received a noisy standing ovation when answering a question about what he wants his legacy to be.

"Well, I hope it is this: The man showed up with a set of principles, and he was unwilling to compromise his soul for the sake of popularity," he said.

He also revealed the topic of the first chapter in his forthcoming book, which he said will be about "the stories of my administration, as I saw them." That first chapter, he said, will answer the question: "Why did I run for president?"