Commentary: No one represents America's center 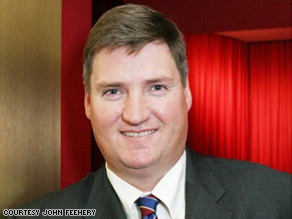 John Feehery says neither party is representing the growing number of centrists in America.

(CNN) -- "There's nothing in the middle of the road but yellow stripes and dead armadillos." -- Jim Hightower

"Standing in the middle of the road is very dangerous; you get knocked down by the traffic from both sides." -- Margaret Thatcher

Despite these warnings from the left and the right, increasingly, the American people are viewing themselves as centrists.

According to the Pew Research Group, fully 39 percent of the American people identify themselves as political independents, the highest percentage in 70 years.

As Andrew Kohut of Pew put it, "Centrism has emerged as a dominant factor in public opinion as the Obama era begins. ... Republicans and Democrats are even more divided than in the past, while the growing political middle is steadfastly mixed in its beliefs about government, the free market and other values that underlie views on contemporary issues and policies."

So, who represents the middle of the road?

Is it Nancy Pelosi, the very liberal speaker of the House, who accuses the CIA of lying, who advocates for abortion on demand and who pushes a radical environmental agenda that will sharply raise taxes on every consumer?

Is it Rush Limbaugh, who insists that Republicans lost the election because they weren't conservative enough?

Is it President Obama, who sprinkles every speech with centrist language but who governs from the left on issue after issue?

I would make the argument that neither political party truly appreciates or values the centrists in their respective caucuses. The Blue Dogs are more like abused little puppies, kept out of most major party decisions, denied chairmanships and prohibited from offering amendments that would reflect their values

Republican moderates either have already lost, like Gordon Smith in Oregon or Wayne Gilchrist in Maryland, or are getting ready to lose, like Norm Coleman in Minnesota, or are switching parties, like Arlen Specter -- or, like Susan Collins or Olympia Snowe, are roundly despised by conservatives.

In either case, it is more likely that the Cubs will win the World Series than it is that a moderate of either party will rise to the top of their party's leadership. No matter how talented a legislator may be, someone like a Tom Davis or Ben Nelson will never lead their congressional party.

Why is it that while centrists make up the majority of the country, they don't have a seat at the table when it comes to running the country? Why do both parties put their leaders through an ideological litmus test before they give them the keys to the car?

As somebody who worked for one the last great centrist leaders, Bob Michel, the Republican leader from Illinois; one of the most ideological leaders in either party, Tom DeLay, who was then the majority whip from Texas; and the longest-serving Republican speaker, Denny Hastert of Illinois, I have gained an unusual perspective about how interest groups, ideology, money and the media play a role in shaping the leadership of either party.

Interest groups: Interest groups like people who support them all the time. They hate people who support them 70 percent of the time. From abortion to guns, from taxes to the environment, only those who toe the party line closely get support. Can you imagine what a world would look like if we reached a legislative consensus on abortion that made most of the country fairly happy? Well, I can tell you two groups that would immediately go out of business should such a consensus emerge.

Ideology: Unlike the consensus that came from World War II, which produced leaders like Bob Michel and Howard Baker, our national leaders today are still scarred by the ideological battles of the 1960s. Democrats like David Obey and George Miller arrived in the class of 1974, and their philosophies were born of the tumult of that age. We still speak in the language of that culture war, liberal vs. conservative, socialist vs. fascist. The deep distrust that sprung from that era lives with the leaders of parties today.

Money: The most important part of being a congressional leader today is the ability to raise money. And for the past two decades, only the ideologues have been willing to give it. Whether it is George Soros on the left or Richard Mellon Scaife on the right, these billionaires give money to fellow travelers and not to deal-makers, and certainly not to centrists. And it is far harder for a centrist to convince donors that they will become leaders in the party and are thus worthy of financial support, because, well, they are centrists.

Media: Centrists make for bad television and even worse talk radio. The absolutists on either side make nice foils and better friends. With the rise of Fox on the right and MSNBC on the left, with Sean Hannity excoriating liberals on his show and with Keith Olbermann doing the same to conservatives on his show, moderates are either attacked as being sell-outs or ignored by both sides. It is hard to become a respected national figure in today's media culture. You are either belittled for being a squish or forgotten because you are not a leader of the party.

So the question that comes to mind is, if moderates can't get any respect from either party, why don't they form their own? Isn't it time to form a third party?

It's a good question. History has not been kind to third parties in America. The Know-Nothings collapsed into nothingness. The Bull-Moosers died when Roosevelt lost. The Dixiecrats eventually became Republicans. And the Perot-istas ran out of Perot's money.

But as we are finding with race, things aren't always as easy as black and white. And it might be time for our politics to evolve to include a third party.

I am a Republican and have been all of my life. But for the Republican Party to prosper, it must appeal to the close to 40 percent who think of themselves as independent and who are personally centrist in their politics. The next election, like the last one, won't be decided by liberal or conservatives. It will be decided by the vast middle, those centrist voters who see the complexities in life and are unimpressed by ideological absolutists.