WASHINGTON (CNN) -- The Republican Party risks further alienating Hispanic voters if it challenges the nomination of Sonia Sotomayor, who would become the first Hispanic, and the third woman, on the Supreme Court, political analysts say. 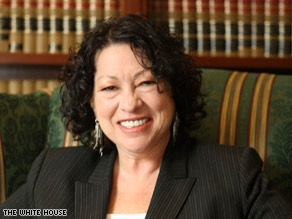 On Tuesday, President Obama nominated 54-year-old Sotomayor -- who is of Puerto Rican descent -- to replace the retiring Justice David Souter.

Sotomayor is a judge on the 2nd U.S. Circuit Court of Appeals, named to that post by President Bill Clinton when she was a U.S. District Court judge, nominated by President George H.W. Bush in 1992.

The barbed comments about Sotomayor began almost as soon as the announcement was made at the White House on Tuesday.

Limbaugh's attacks aside, many influential Hispanic leaders were optimistic and warned the GOP against rushing to conclusions before she pleads her case before the Senate, which must confirm her.

"I do think Republicans have to be very careful and not oppose this nomination just for the sake of it," said Brent Wilkes, executive director of the League of United Latin American Citizens. "Because when you think about that the length of time the Latino community has waited for this nomination, it's been a long time."

"If they just out of sheer ill-will ... try to block the nomination, that's going to have a big backlash in the Hispanic population," Wilkes warned. "And we won't have to do anything except sit back and watch them destroy themselves, because it's really going to be that bad."

Ruben Navarrette, a syndicated columnist and CNN contributor, said Latinos are simply "running out of patience."

"For 20 years I've been hearing the drumbeat from Latinos they been waiting for a Latino on the Supreme Court. ... They're ready and they're due -- not because of what happened in the last election but because what's been going in the past 50 years and what will happen in the next 50," he said, referring to the projected rise in the Latino population.

According to exit polling from the 2008 general election, Obama received 67 percent of the Hispanic vote and Republican Sen. John McCain received 31 percent -- down significantly from the number of Hispanics who voted for former President George W. Bush in 2000 and 2004.

But Republican strategist Leslie Sanchez, who is also a CNN contributor, said senators shouldn't feel obligated to vote for Sotomayor because of the potential for Hispanic outreach, but rather on her qualifications.

"I think many in the Hispanic community are excited about this nomination. There's no doubt about that. As a Latina and as someone who was raised by a single mom I get that," she said. "I think, with all due respect to this confirmation and this process, the fairer we are, the better it is for all people."

"I don't think any gender group or ethnic group is entitled to representation on our courts," he said.

Alex Castellanos, a GOP strategist and CNN contributor, said Obama may be taking the country back to the era of identity politics.

"He didn't play that card in the campaign, he fought against that. And he said we're now at a new place," he said. "And now the question is ... is he taking us back to identity politics saying that someone is a better judge because of their race or their gender or their ethnicity?

Paul Begala, a Democratic strategist and CNN contributor, however says it's extremely likely that Sotomayor will be confirmed based on her qualifications and not her ethnicity.

When asked about the risk of alienating Hispanic voters, Republican National Committee Chairman Michael Steele said, "You have to be careful, you don't want to be seen as a bully in this situation."

"I think our party will right now avoid the partisan knee-jerks that come with some of these things," he added. "We're not in the business of pillorying someone ... we do have some reservations and concerns on her views on the Second Amendment, her views on abortion, her views on ... property rights."

Potential 2012 presidential candidate Mike Huckabee -- who mistakenly referred to her as "Maria" in a press release -- said the pick is the "clearest indication yet that President Obama's campaign promises to be a centrist and think in a bipartisan way were mere rhetoric."

"If she is confirmed, then we need to take the blindfold off Lady Justice," he added.

"Her public statements make it clear she has an expansive view of the role of the judiciary. Historically, the court is where judges interpret the Constitution and apply the law. ... What the American public deserves is a judge who will put the law above her own personal political philosophy."