(CNN) -- With President Obama's nomination Tuesday, a federal appellate judge could become the first Hispanic U.S. Supreme Court justice and the third woman to serve on the high court. 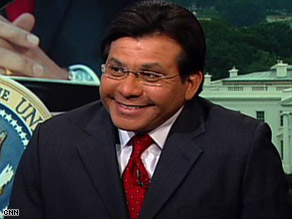 Sonia Sotomayor, who is on the 2nd U.S. Circuit Court of Appeals, was named a U.S. District Court judge by President George H.W. Bush in 1992, and was elevated to her current seat by President Bill Clinton.

CNN's Wolf Blitzer spoke with former U.S. Attorney General Alberto Gonzales about what it means to have a Hispanic judge nominated, what problems conservatives may have with her, and whether he believes she's the right person for the job.

Here is an edited version of that interview:

Blitzer: Let's get to a former member of the Bush administration who has a unique perspective on Sotomayor's nomination to the United States Supreme Court. That would be the former attorney general of the United States, Alberto Gonzales. He once was seen as a possible contender himself to be the first Latino on the high court.

Attorney general, thanks very much for coming in.

Gonzales: It's good to see you, Wolf.

Blitzer: How close were you, in your mind? Did you ever find out how close you were to being President (George W.) Bush's nominee for the Supreme Court?

Gonzales: I didn't concern myself, Wolf, with respect to my status on the short list, so ...

Blitzer: But do you know if you were on the short list?

Blitzer: But you -- but you know you were, right?

Gonzales: Listen, I know that people -- people did consider me as a possible candidate for the Supreme Court.

Blitzer: All right. Well, now there's going to be -- well, there's a nominee, already, who's Hispanic, a woman.

Blitzer: How do you feel about that?

You're the first Hispanic to serve as the attorney general of the United States. What do you think about her?

Blitzer: Because that picture that we saw earlier at the White House, the first African-American president now nominating the first Hispanic justice -- to become a United States Supreme Court justice.

That says a lot about what's going on in our country right now.

Blitzer: Here's what she said back in 2001, and I'll put it up on the screen: "I would hope that a wise Latina woman with the richness of her experiences would more often than not reach a better conclusion than a white male who hasn't lived that life."

That's generating some commotion out there.

Gonzales: I'm not sure what that -- what she was trying to say there. I think -- you know, I served on the Texas Supreme Court. And there were times -- there were cases in which I had to interpret a statute. I didn't like the outcome based upon that interpretation as I read the statute, the intention of the state legislature, but I felt obliged by my oath of office to honor that intent of the legislature.

I think it's dangerous when judges impose their own personal views with respect to the outcome of a particular case.

Blitzer: Did you -- when the president of the United States says he wants something -- someone who's empathetic, and has had real-world, real-life experiences, is that good or bad?

Gonzales: I think we all -- we'd like to think that all of our government officials are good people, compassionate people. And obviously, someone with this kind of story makes a very attractive candidate in a confirmation process.

But to say that you empathize with someone, I think it's -- it's very, very difficult to predict the outcome of a case based upon whether or not a judge feels good about a result. I think there ought to be predictability and certainty in the interpretation of our laws. I think that's the number one requirement that a president should look for in the nomination of a Supreme Court justice.

Based on what you know about her, do you think she's qualified to be a United States Supreme Court justice?

I think there are legitimate questions about her judicial philosophy, and again, that will be something that ... will be examined in the confirmation process.

Blitzer: As a Hispanic-American, how worried are you that if Republicans or conservatives go really hard against her, that would further alienate the Hispanic vote against the Republicans in the years to come?

Blitzer: How worried are you, switching gears for a moment, that the Justice Department lawyers who wrote those legal opinions authorizing enhanced interrogation, how worried are you that the system now will come down on them, either disbarment or worse?

Gonzales: What I worry about, Wolf, is that good people, well- intentioned people serving in a historically difficult time, a dangerous time in our nation's history, may be penalized for doing their best, simply providing the best legal advice that they can.

I'm afraid of the chilling effect that that's going to have on future lawyers at the Department of Justice.

Blitzer: You were the White House counsel at that time. This was before you became the attorney general.

Blitzer: And were you involved in some of those legal opinions early on?

Blitzer: So are you in any -- do you think -- are you afraid that you could be in any legal jeopardy right now?

Gonzales: Wolf, I stand by my record. I did my best to defend our country during very difficult times, so I'm proud of my service.

Blitzer: All right. Attorney general, thanks very much for coming out.