Analysis: Powell flap gets GOP to ask 'What kind of party are we?'

(CNN) -- Colin Powell stirred up the Republican Party's very public internal debate about the direction of the party and asserted it's losing because it doesn't appeal to moderates like him. 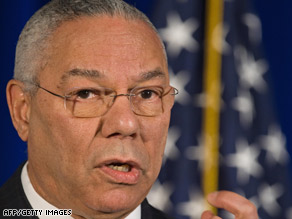 Powell says he's still very much a Republican and said the party would be better off to include more moderates like him.

"I think the Republican Party has to take a hard look at itself and decide: What kind of party are we?"

As it has squabbled within the family, the party has wandered. Most analysts say it will get back on the right track when its next leaders emerge.

Is Powell emerging as a voice of the moderates in the party?

"A spokesman is good," said Bill Schneider, CNN senior political analyst. "A candidate would be better."

Watch what CNN's Bill Schneider has to say about the debate »

The Republicans' family argument started shortly after the Democrats won the White House and added to their control of Congress.

Conservatives blame moderates for the losses, saying the party didn't present a contrast with Democrats and the only way for it to be successful is to lean harder to the right.

Limbaugh and Cheney emerged from the leadership vacuum -- Limbaugh from his legions of listeners and Cheney in his emergent role as the sole defender of the Bush White House.

Powell provoked Limbaugh when he suggested the GOP's future was in peril if it went in the Limbaugh's direction. Limbaugh responded that Powell is part of the "stale, the old, the worn-out GOP that never won anything."

Powell says the right has alienated undecided and independent voters and the only way for the GOP to return to power is to expand its narrow base.

The former Pentagon commander of the 1991 Persian Gulf war has for the most part stayed out of politics since resigning as President's Bush's secretary of state in Bush's first term.

Among Republicans, Powell, Cheney and Limbaugh are equally revered with favorability ratings in the 60s, according to a new CNN/Opinion Research Corp. poll.

"Colin Powell is not the guy you want to pick a fight with," Schneider said. "He's more popular than Dick Cheney and Rush Limbaugh combined.

Between the two polls, Limbaugh's unfavorable rating among all respondents was 53 percent and Cheney's 55 percent.

Former Homeland Security secretary Tom Ridge, another moderate, sided with Powell in an interview with with CNN's John King on "State of the Union" on Sunday.

The former Pennsylvania governor said the different wings of the party need to listen to each other and differences of opinions need to be less divisive.

"Rush Limbaugh has an audience of 20 million people. A lot of people listen daily to him and live by every word. But words mean things and how you use words is very important," Ridge said.

"It does get the base all fired up and he's got a strong following," Ridge continued. "But personally, if he would listen to me and I doubt if he would, the notion is express yourself but let's respect others opinions and let's not be divisive."

Ridge, who ruled out a Senate bid earlier this month, also called for an end to personal attacks.

"Let's lead our party based on some principles that have been very much a part of who we are for decades. And let's be less shrill ... and particularly, let's not attack other individuals. Let's attack their ideas," said Ridge.

Republican strategist and CNN contributor Mary Matalin challenged what she called the "liberal-lite" wing of the party and said Republicans win when they run on their conservative convictions.

When [Powell] supports Barack Obama, one presumes he's supporting those principles and policies," Matalin said. "Those are liberal principles and they spawn liberal policies. The road forward for Republicans is not to be 'liberal-lite,' " said Matalin.

"This debate is a long one and it always is taking place vigorously when we change through any new paradigm. What is the scope and the role of a government in a free state? Those are big principles, big ideas, and that's how we should go forward. And anybody who agrees with those ideas should be in the party. If you don't agree with those ideas, you can be in the other party," she said.

On another talk show, former George W. Bush adviser Karl Rove, who served with Powell and Cheney in the White House, took Limbaugh's side, saying he would choose the radio host over the former secretary of state if he "had to pick between the two," in an interview on "Fox News Sunday."