(CNN) -- President Barack Obama wants intellectual firepower and a common touch in the next Supreme Court justice, and doesn't "feel weighed down by having to choose ... based on demographics." 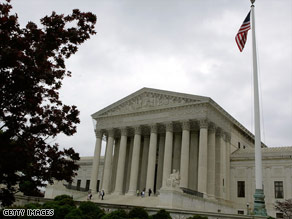 With a nomination potentially just days away, Obama was asked in a C-SPAN interview what he would tell his wife, Michelle Obama, his daughters and his mother-in-law if he didn't choose a woman.

"Actually I can't tell you the number of women, including Michelle, who say, 'Choose the person you think is going to be best,'" Obama responded.

He said, "I think in any given pick, my job is to just find somebody who I think is going to make a difference on the courts and look after the interest of the American people. And so, I don't feel weighed down by having to choose a Supreme Court justice based on demographics. I certainly think that ultimately we want a Supreme Court that is reflective of the incredible variety of the American people."

Obama said he thought it was "safe to say" the announcement about the Supreme Court justice, who will replace retiring Justice David Souter, would come soon, although he offered no specific date.

On Friday, a top aide to the Senate Judiciary Committee's chairman told fellow Democrats to get ready for the president's Supreme Court pick to come as early as next week, according to an e-mail obtained by CNN.

"It is possible the president will designate his nominee to the Supreme Court as early as next Tuesday or some time next week," Jeremy Paris, Vermont Sen. Patrick Leahy's chief counsel for nominations, wrote in the e-mail to fellow Democratic aides.

The president laid out on Saturday what he hopes will be the time frame for the confirmation process. He said he hopes to have hearings in July, with the confirmation completed before Congress leaves for the summer.

"One of the things I would prefer not to see happen is that these confirmation hearings drag on and somebody has to hit the ground running and then take their seat in October without having the time to wrap their mind around the fact that they are going to be a Supreme Court justice," he said in the C-SPAN interview.

Obama said he was looking for a mix of characteristics in a nominee.

"What I want is not just ivory tower learning," he said. "I want somebody who has the intellectual fire power, but also a little bit of a common touch and has a practical sense of how the world works."

He added, "Those criteria of common sense, practicality, a sense of what ordinary Americans are going through every day -- putting that in the mix, when the judges are looking at cases before them, it's very important."

Obama said he finds characteristics he admires even in justices he doesn't agree with.

"Justice (Antonin) Scalia is a terrific writer, and makes really interesting arguments," Obama said. Speaking of now-retired Justice Sandra Day O'Connor, Obama said, "I might not have agreed with her on every issue, but you always had a sense that she was taking the law and seeing what the practical applications of the law in this case."

The president said, "different times call for different justices," with each bringing "their own strengths and weaknesses" to the bench.

A constitutional law professor, Obama was asked if he would want to follow President William Howard Taft to the High Court after leaving office. He laughed. "You know, I am not sure I could get through the confirmation process," he said.