WASHINGTON (CNN) -- Staff Sgt. Cody Reeves has survived harrowing conditions and stared down enemies on the battlefield during two tours in the military hotspots of Iraq. 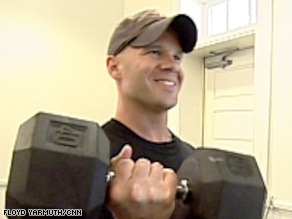 Now he is stationed near Dover Air Force Base in Delaware, trained to carry the remains of fellow soldiers who perished in that same conflict.

Reeves serves in the Army's Old Guard, a tight-knit group of soldiers of similar height and size who physically bear the weight of the Army's fallen veterans. The Old Guard conducts a 15-minute ceremony called a dignified transfer.

A recent decision by Defense Secretary Robert Gates gives families the choice to allow media to film the solemn event. It's the first time in 20 years the ceremony has been open to the press.

Watch members of the Old Guard in action »

Every detail of the transfer is precise. When an American soldier dies overseas, the Old Guard is called into action. They travel from their base to Dover, where they meet the aircraft carrying the soldier's body. The six men receive the flag-draped casket, which can weigh 500 pounds, and carry the soldier's body to a waiting vehicle.

Women serve as officers in charge on the Army transfer teams, but do not carry the caskets. For Air Force transfers, which use eight people, women help carry the coffin.

Despite the cold or the heat, the late hour when the planes often arrive and the physical and emotional strain of their job, the soldiers keep their faces blank.

"There's definitely times where your mind goes off, even in the ceremony," said Spc. Wilbert Steinborn, another member of the Old Guard. "You say, 'This guy might have a wife or kids or mother or father who's never going to see him again.'

The men stifle sneezes, learn to yawn through their noses and betray no sign of the burden they carry. And -- what they say makes keeping their composure even more important -- the team performs its duties in front of the soldiers' families.

"We're soldiers too. We're infantrymen. We could easily be in their place," Steinborn said. "It's hard because you honestly think you see your wife or your girlfriend sitting where the next-of-kin is. You can imagine yourself being there.... So I think that's why we try to be as precise and exact, and look as good, and make them look as good as possible."

Some of the Old Guard choose to learn about the lives of the soldiers they've carried. Reeves asks for information about the fallen after having participated in the ceremonies, but never before he greets the soldier's body.

"It's 'take care of business' and then afterwards I like to know a little bit about the soldier," he said. "That way you can keep emotions at bay and you're just focused on doing the soldier part."

Strikingly, the men, who head to their barracks' gym for intense weight training twice a day and take five-mile runs as a team, seem to be able to communicate without speaking. After drilling for countless hours on the base's grounds, they can feel if another man is even minutely out of step in the ceremony. Sometimes they'll whisper corrections so discreetly no onlooker would ever notice.

The nature of their job means the men also share a tighter, unspoken bond.

"When I was walking through the aircraft and saw the transfer case with the American flag draped over it, it was -- it was very emotional," Steinborn said. "I don't know if it sadness or pride or what, but -- it was honestly the most difficult and touching thing that I have ever done."

All About Dover Air Force Base • Iraq War