Unsung World War II heroes finally get their due

WASHINGTON (CNN) -- Some 65 years after their service, the 300 surviving Women Airforce Service Pilots are being honored with the Congressional Gold Medal.

The House of Representatives on Tuesday passed a measure awarding the women one of the national's highest civilian honors. The Senate passed a similar measure in May and President Obama is expected to sign it. 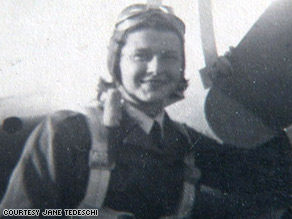 Jane Tedeschi when she was in the Women Airforce Service Pilot program.

With only about a quarter of the former WASPs still alive and all in their late 80s or older, it was important for the House to act quickly, Rep. Ileana Ros-Lehtinen, R-Florida, a sponsor of the bill, told CNN.

"This is a largely overlooked veterans group. They haven't gotten the medals they deserve, the recognition they deserve," Ros-Lehtinen told CNN.

From the time she was about 8 years old, Jane Tedeschi wanted to fly.

"[Charles] Lindbergh was flying across the Atlantic, and a lot of other people were flying air races and things like that. It was very romantic," she said.

Flight was still relatively new in the 1920s and 1930s, and female pilots were few.

But Tedeschi was determined.

Around the same time, Deanie Parrish was working in a bank in Avon Park, Florida, and kept seeing aviation students who were attending a flying school there.

"I asked an instructor 'Why can't I learn to fly,' and he didn't have an answer...so I decided to find out for myself."

The Women Airforce Service Pilots was born in 1942 to create a corps of female pilots able to fill all types of flying jobs at home to free male military pilots to travel to the front.

"Everybody was doing something," she said. "I wanted to do something for my country."

Candidates had to be at least 21 years old and at least 5-feet, one-half inch tall.

"I frowned," she recalled. "I said I need that half-inch, so he wrote it down." She was in.

Eventually 1,102 women completed the program and were assigned to one of 120 bases across the country to start their missions.

Depending on the base, they did everything from participating in ground-to-air anti-aircraft practice; towing targets for air-to-air gunnery practice with live ammunition; flying drones; conducting night exercises; testing repaired aircraft before they were used in cadet training; serving as instructors; and transporting cargo and male pilots to embarkation points.

Paid $250 a month, the women were not officially part of the military -- receiving no benefits, no honors.

Eventually Parrish was sent to Florida where she flew a B-26 bomber for air-to-air target practice, training gunners for combat.

Tedeschi, who graduated in May 1944, was sent to a Selma, Alabama, base which did more engineering work.

For instance, she would take planes up after repair which could involve acrobatic work -- "which, of course, we liked to do," or be called to do night flying.

While the work was technically non-combat, it could be dangerous.

Thirty eight of the pilots were killed. Parrish recalled the military would not allow the flag to be put on a colleague's coffin.

"You got home the best way you could," said Parrish. "I paid my own way home."

The women then went off to restart their prewar lives -- but without getting any of the help that male veterans were getting.

"We were proud of what we did, and the war was over. It was time to get on," said Tedeschi, who is married and 89 years old.

But many Americans were not aware of their efforts. The WASP records were sealed for more than 30 years. In 1977 Congress voted to make them eligible for veterans' benefits.

Parrish married a pilot after the war. She and her daughter, Nancy, for over a decade have documented the work of the WASPs. Read more about the WASPs at the Wings Across America Web site.

While some of the WASPs say the medal itself is a nice gesture, more importantly they say they hope the publicity will teach younger generations about their accomplishments and remind some still skeptical men just how capable women are.

"People all over the country will hear about it. It will be a national event," Parrish said.

All About World War II