President Obama stood Friday before the graduates of the Naval Academy and made a vow that reflected the criticisms of the previous administration that filled much of his presidential campaign. 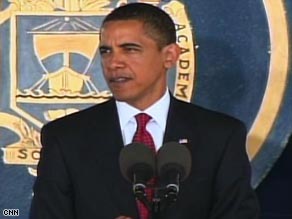 "It's a promise that as long as I am your commander in chief, I will only send you into harm's way when it is absolutely necessary, and with the strategy, the well-defined goals, the equipment and the support that you need to get the job done," he told the crowd in Annapolis, Maryland.

He noted that the government has "halted reductions in Navy personnel and increased the size of the Marine Corps," and he said, "We will maintain America's military dominance and keep you the finest fighting force the world has ever seen."

The event -- the president's third and final commencement address of the year -- was notable in part for someone who was in attendance: Sen. John McCain, Obama's former rival for the presidency, who was celebrating the graduation of his son, John Sidney McCain IV.

More commonly known as Jack, he is the fourth McCain to graduate from the academy, and the fourth with the same name. He was to receive a bachelor of science degree, take an oath and be commissioned as an ensign in the U.S. Navy 103 years after his great-grandfather did the same.

Each member of the class at the graduation stepped up to the stage, shook hands with the president, and received a diploma.