WASHINGTON (CNN) -- Gun rights advocates found an unlikely ally in the Democratic-controlled House of Representatives on Wednesday as lawmakers passed a measure allowing concealed, loaded firearms to be carried in national parks. 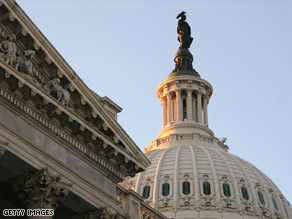 The House approved a measure Wednesday to allow concealed firearms in national parks.

The proposal passed 279-147, winning overwhelming Republican support and that of a significant number of more conservative rural and western Democrats.

The Senate voted 67-29 on Tuesday to attach an identical measure to a bill cracking down on credit card fees. Senate Majority Leader Harry Reid, D-Nevada, was among 27 Democrats backing the measure.

Under the measure, any person with a state permit to carry a concealed weapon would be able to bring that weapon into parks and wildlife refuges unless a state law specifies otherwise.

The firearms language is now expected to be included in the final version of the credit card legislation, which lawmakers want to deliver to President Obama's desk by Memorial Day.

The language has been strongly pushed by Sen. Tom Coburn, R-Oklahoma, who saw an opportunity to grab on to a comparatively fast-moving target since Obama and the congressional Democratic leadership have made the credit card bill such a high legislative priority.

Coburn, speaking on the Senate floor Thursday, said his move "isn't a 'gotcha' amendment" but a genuine step to protect the Second Amendment. The measure would reverse a federal judge's decision in March to block a last-minute rule change by President George W. Bush to allow park visitors to carry concealed weapons.

"It was just an opportunity," Coburn spokesman Don Tatro said. The "congressional leadership has been trying to keep it from happening, and this was just the first opportunity."

Gun rights activists, however, have been cautious about declaring victory prematurely.

"Prior to the ink drying to anything that's signed, it's rare for a piece of legislation to not have ghosts haunting it," National Rifle Association spokesman Andrew Arulanandam said last week.

Some congressional Democrats are dismayed by what they see as the continued success of the gun lobby in the face of a new Democratic administration and expanded Democratic majorities in Congress.

"The NRA is basically taking over the House and the Senate," said Rep. Carolyn McCarthy, D-New York. "If the NRA wins on each and every bill, the American people are going to suffer the most."

All About Gun Control • U.S. House of Representatives