GOP chairman says era of apologizing is over

OXON HILL, Maryland (CNN) -- Republican National Committee Chairman Michael Steele declared Tuesday that Republicans will no longer talk about their mistakes; instead they will focus on the future and serve as the loyal opposition party to President Obama and the congressional Democratic majority. 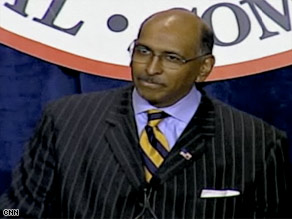 "The era of apologizing for Republican mistakes of the past is now officially over," Steele told state Republican leaders meeting in a suburb of Washington to discuss the party's political future. "It is done. The time for trying to fix or focus on the past has ended. The era of Republican navel-gazing is over. We have turned the corner on regret, recrimination, self-pity and self-doubt. Now is the hour to focus all of our energies on winning the future."

Steele, who had a rocky start in his first 100-plus days in office, received a standing ovation when he took the stage. It was a public boost in the arm for the chairman whose leadership of the national committee has been called into question by some of his fellow Republicans.

Steele sought to silence those critics by noting that since assuming the national committee chairmanship, he has traveled to 23 states meeting with grass-roots activists while turning a deaf ear to the talk in the nation's capital.

"Too bad the chattering classes inside the Beltway are too busy fretting over phony disputes and intra-party intrigue to notice that a change has indeed come to America," Steele said. "But it's not the one the Obama administration wants aired on the nightly news.

"Those of you who live outside of Washington know what I'm talking about. Those of you who actually attend Lincoln Day dinners and county party events, those of you who toil in the vineyards, spending time in communities, in diners, in barber shops and in coffee shops where real, everyday people can be found. You know it is real. You can see it and feel it. This change comes in a tea bag."

The tea reference was a nod to the rallies, which participants likened to the Boston Tea Party, that have taken place across the country to protest high taxes and call for smaller government.

Steele also made it clear that he thinks the revival of the Republican Party will come from outside the nation's capital.

"Our comeback will not begin in Washington," Steele said. "Our conversation with America will not focus on Washington. Our Republican National Committee will no longer rely on Washington. We will look to the rest of America instead."

Before the Republican Party launches an offensive, it must resolve the battle for control of what the party's steering wheel.

Republicans were thrown into a self-examination process after losing control of the White House and additional seats in the House and Senate in the 2008 elections.

So far, 2009 has proved no better. Republicans failed to win back a Democratic-held New York congressional seat despite having more registered GOP voters, Pennsylvania Sen. Arlen Specter renounced his Republican affiliation to join the Democratic Party, and there has been a very public fight between centrists and social conservatives over what direction the GOP should head.

And then there has been the criticism of Steele, which an ally charged was not grounded in fact.

"At the end of the day, that breath of fresh air may not have been what some wanted. They wanted to revisit the election. I think the door is closed. Michael Steele is here to stay as chairman of this party. He is going to do great things for this party, and that's what Republicans across this country want."

The national committee chairman, though, saved his most scathing critique for Obama on issues ranging bailouts and banning guns to potentially taxing soft drinks.

"While we welcome Chairman Steele's words that the GOP wants to turn the page on its past, we are disheartened by the party's actions that tell the opposite story," said Democratic National Committee spokesman Hari Sevugan. "While the chairman talks of moving forward, the very convention he's addressing will not focus on coming up with new ideas to create jobs and setting right what the party got wrong over the last eight years, but instead will revolve around name-calling and the petty politics of the past."

Though Steele said the Republican Party is now moving forward, he did acknowledge that national Republicans in recent years had compromised one of the party's main principles, fiscal discipline, and failed to follow through on their pledge to change Washington.

"In some ways, we let Washington change us, and we owned up to that," he said. "We've taken some important steps to recover our values and senses, and we can say we see the world with a clearer head and a sharper vision."

The Republican National Committee meeting wraps up on Wednesday with a vote on a controversial resolution that calls on Democrats to rename their party the "Democrat Socialist Party."